The express train, which was on the first line, was given a green signal to move from line 1 to line 3, so that it could enter platform no 3. 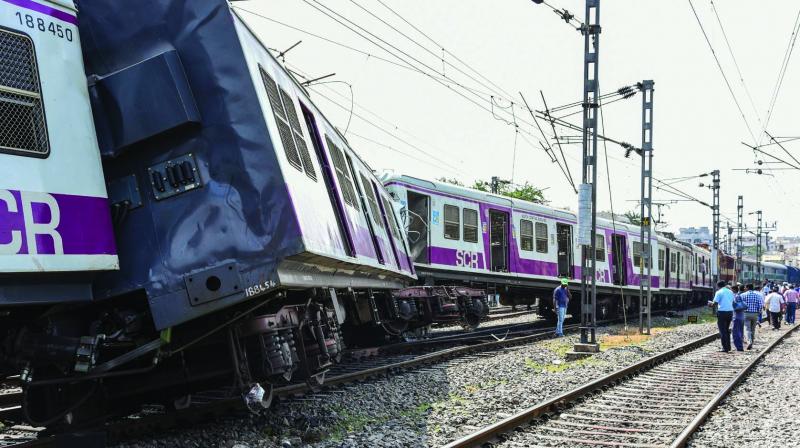 Onlookers gather at the accident site where a Multi-Modal Transport System train collided with a passenger train between Kacheguda and Malakpet stations in Hyderabad on Monday. An injured passenger (inset) is taken to a hospital for treatment. (Photo: PTI)

Hyderabad: Two passenger-filled trains – an MMTS local and the Hundry Intercity-Express – had a head-on collision near Kacheguda railway station in the city on Monday morning in which 16 people, including the MMTS loco pilot, were injured.

At 10.39 am on Monday, an MMTS train (47178), headed from Lingampally to Falaknuma and the Hundry Intercity Express train, going from Kurnool to Secunderabad, collided at the interchange of the Kacheguda railway station.

This is the first-ever incident of a head-on collision, in which both railway trains were headed towards the other on the same track in the South Central Railway. “We have never ever seen an incident like this before,” said senior SCR officials.

The express train, which was on the first line, was given a green signal to move from line 1 to line 3, so that it could enter platform no 3. While the express train was changing its tracks, heading from line 1 to 3, the MMTS, which was stationery on platform number 2 and should have been made to wait there with a red signal, till the Intercity express had reached the platform no. 3, started from the station, surged ahead and collided head-on with the express.

The MMTS, starting from platform no 2, headed towards Falaknuma, collided with the Hundry Express, as it was entering the Kacheguda railway station at the interchange. Only seven coaches of the MMTS had left the platform, while five were yet to leave the platform, when the accident took place.

The collision resulted in crushing of the MMTS local train. The accident led to the derailment of six MMTS coaches and three coaches of the express train. The footage of CCTV cameras at the Kacheguda railway station captured the collision of trains and passengers of MMTS jumping out of the derailed coaches to save their lives.

The Railway Protection Force (RPF) and Government Railway Police (GRP) swung into the action to rescue passengers and the National Disaster Response Force. The Disaster Relief Force (DRF) teams of the Greater Hyderabad Municipal Corporation (GHMC) were also called to carry out an operation to rescue the loco pilot, who was stuck between the engines.

Chandra Shekar D, the MMTS loco pilot, who got stuck inside the cabin of the MMTS, was rescued by the NDRF and GHMC DRF teams after a rescue operation that lasted over seven-and-a-half hours. The 15 other injured persons were admitted to Osmania General Hospital. Of the injured persons shifted to  hospital, seven are admitted with severe injuries, but others were discharged after being given first-aid.