The video footage also shows the woman shouting at the police and telling them she was unwell and feeding her child. 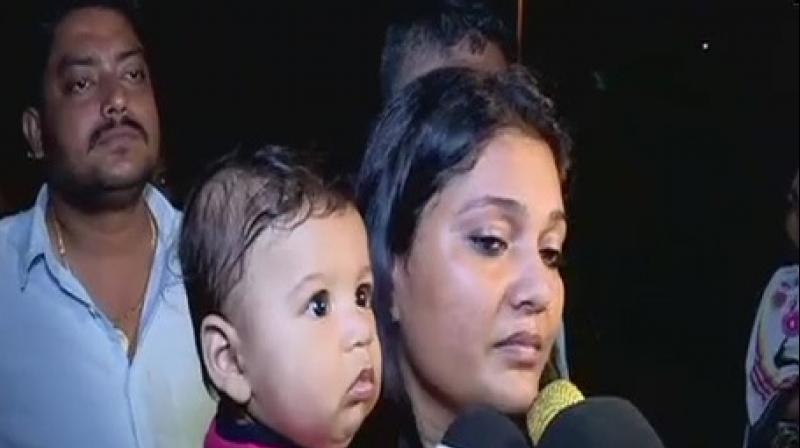 Onlookers, who can be heard shouting at and protesting the police action in the video clip, asked constable Shashank Rane, who was accompanying the towing van, to stop it. (Photo: ANI)

Mumbai: A car with a woman and her baby inside was towed away by the city traffic police at Malad, inviting widespread condemnation, which prompted the police to suspend one of its constables and order a probe.

The shocking incident came to light on Saturday when a purported video clip of it went viral on social media, a police official said.

An inquiry has been ordered into the incident, which took place at Malad in the western suburbs of the city on Friday around 4.30 pm, he said, adding, the probe will be conducted under the supervision of DCP (Traffic), western suburbs.

The woman had gone to Malad for some work with her husband and the child and parked the car on the busy S V Road.

As the car was obstructing the vehicular movement, the traffic police arrived at the spot with a towing van. When the van was about to leave with the car, the woman sat inside the vehicle with her baby, he said. Police requested her to step out and officials from the Malad Police Station were called in to tackle the situation but to no avail, the official said.

The video shows the woman and her baby sitting on the rear seat of the car and the traffic police towing it away.

Onlookers, who can be heard shouting and protesting the police action, asked constable Shashank Rane, who was accompanying the towing van, to stop it.

The video clip also shows the woman shouting at the police and telling them she was unwell and feeding her child.

The official said the couple was taken to the police station where the woman's husband paid a fine for unauthorised parking and the issue was sorted out.

The DCP (Traffic), western suburbs, has been asked to conduct an inquiry into the incident and submit a report by Sunday, said Amitesh Kumar, Joint Commissioner of Police (Traffic). It has been prima facie noticed that safety of the woman and the child were endangered in the incident. Hence, pending inquiry, the constable is being placed under suspension, he said.

A decision about departmental action against him will be taken after the report is received, Kumar said.