Massive Rajput community protests in Gujarat against release of 'Padmavati'

With the Assembly polls approaching in Gujarat, Rajput agitators also warned the ruling BJP to face consequences if the movie is released. 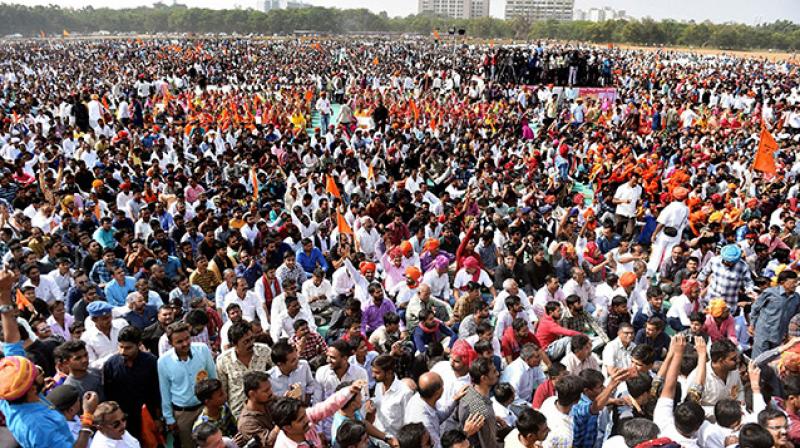 Over one lakh Rajputs converged at a massive gathering at Gandhinagar in protest against Padmavati. (PTI)

Ahmedabad: Members of the Rajput community on Sunday held massive protests in Gandhinagar and Surat in Gujarat demanding a ban on the release of Bollywood film 'Padmavati'. The protestors allege that the makers had distorted historical facts in the film.

While over one lakh members of the community converged at a massive gathering at Gandhinagar, thousands took part in the protest march in Surat to raise their demand of staying the release of Sanjay Leela Bhansali-directed movie.

The movie is scheduled to release on December 1.

Mansinh Rathod, who is leading the Gujarat chapter of 'Karni Sena', claimed that Mr Bhansali has "distorted the historical facts in the movie."

"We have learnt that there is a dream sequence in the movie wherein 'Rani Padmavati' has been shown romancing with 'Allaudin Khilji'. We condemn such a heinous portrayal our queen. 'Karni Sena' will never allow such movie to hit the theatres," Rathod said.

He said not just Gujarat, the movie must not be released anywhere in the country. "To raise our demand, Karni Sena and other Rajput and Hindu organisations called a gathering in Gandhinagar. We had also organised a protest march in Surat. It is our clear warning that if this movie gets released on December 1, there will be violent protests and government will be responsible for the law and order situation," he added.

In Gandhinagar, the mega gathering of the Rajput community saw the presence of senior Karni Sena leaders, such as its founder Lokendrasinh Kalvi and national president Mahipalsinh Makrana.

"Though the release has been scheduled on December 1, we will make sure that the movie does not see the light of the day," Kalvi claimed.

According to Virendrasinh Bhati of Karni Sena, Bhansali has backtracked from his promise of showing the movie to the Rajput community to get a clearance first.

"We are very much sure that there is dream sequence in the movie. If Bhansali claimed that the movie is as per the historical facts, then why he has not fulfilled his promise of showing it to us. We want the government to take a clear stand and ban the movie. If the movie gets released, Rajputs will show what they can do," said Bhati.

With the Assembly polls approaching in Gujarat, Rajput agitators also warned the ruling BJP to face consequences if the movie gets released.

"We want a complete ban on the movie. If the Centre or state government fails to step in, the BJP may have to face the ire of the community during the Gujarat polls," Rajput leader from Surat Yashwantsinh Vala said.

Last month, former Congress leader and Rajput strongman Shankersinh Vaghela demanded a pre-release screening of 'Padmavati' for Hindu and Rajput community leaders to check if the makers have not distorted the facts.

He had also warned of violent protests by the people of Gujarat if the movie is released without showing it to community leaders.

Recently, Gujarat BJP had given a representation to the Election Commission opposing the release ahead of Gujarat elections next month, saying that distortion of facts in the movie will hurt the sentiments of the Kshatriya Rajput communities.

'Padmavati' has been facing a lot of trouble since early this year. Bhansali was assaulted by activists of a Rajput community group, Karni Sena, while shooting in Jaipur.