An online store, which was launched on April 28 by the AIDS Healthcare Foundation delivered over 9.56 lakh condoms for free. 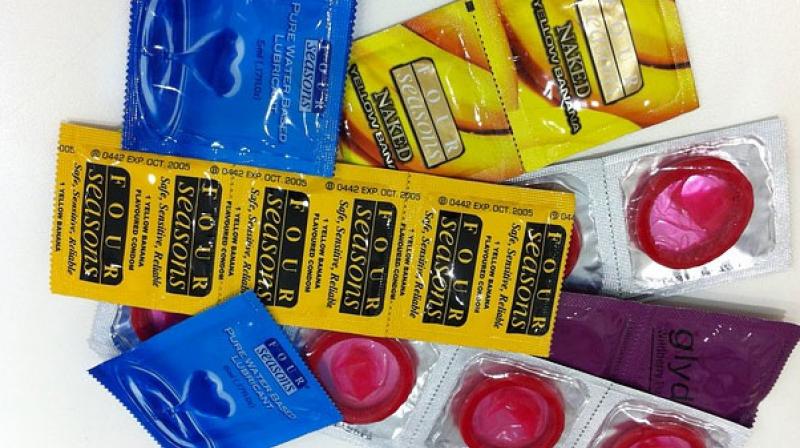 The foundation partnered with state-run Hindustan Latex Limited, which makes a special brand of condoms for them. (Photo: Pixabay)

Bengaluru: In a country, where taboo comes free of cost and condom use is limited to just five per cent of the contraceptive market, Indians ordered 10 lakh in just 69 days since the opening of Free Condom Store.

An online store, which was launched on April 28 by the AIDS Healthcare Foundation delivered over 9.56 lakh condoms for free, a TOI report read.

Researched data shows, out of the total, 5.14 lakh condoms were requested by communities and NGOs, while the remaining (4.41 lakh) were ordered by individuals. Demand from individuals was highest in Delhi and Karnataka.

The foundation partnered with state-run Hindustan Latex Limited (HLL), which makes a special brand of condoms for them.

The foundation's India programme director, Dr V Sam Prasad said that they were surprised with the response.

"We thought the stock of 10 lakh condoms would suffice until December but we ran out by the first week of July. We have ordered another 20 lakh which we will receive in the last week of November and orders for another 50 lakh have been placed for January," he said.

The report further adds that experts say, the huge response received online might be because of the fact that most Indians shy away or are embarrassed of walking into a store and asking for a condom since it is a product linked to 'sex'.

"That the delivery person does not know what's in the package, and those who take the order don't see the person placing the order does away with the awkwardness otherwise associated with the purchase or taking it from a volunteer," one expert says.

The contraceptive industry too agrees that stigma is still an issue in India.

"The sexual wellness category faces different challenges in different cultures. A developed market like UK has condom category penetration of 30 per cent while in India that number is only 5 per cent. The biggest challenge in India is the taboo around sex, which presents a barrier to creating awareness or even physical access," a spokesperson from Reckitt Benckiser, makers of Durex, said.

Multiple firms have been rebranding and redesigning condom packages. They have also launched innovative campaigns to spread awareness, the report added.

The Centre and various state governments also have schemes to promote condom use.

It is the cheapest way to plan a family and the only one that also protects people from sexually transmitted diseases (STD).

Yet, the latest National Family Health Survey shows only 5.6 per cent of those surveyed, used condoms for birth control. Even in a developing state like Karnataka, only 1.7 per cent use condoms.

The number is 3.6 per cent in Bengaluru, which poorly compares will Kolkata (19 per cent) or Delhi (10 per cent).

On the positive side, the National AIDS Control Organisation (NACO) data shows increase in condom usage among sex workers and other high-risk groups, but the organisation observes that there is still a long way to go.