16 dead, 7 missing after boat capsizes in Krishna river in AP 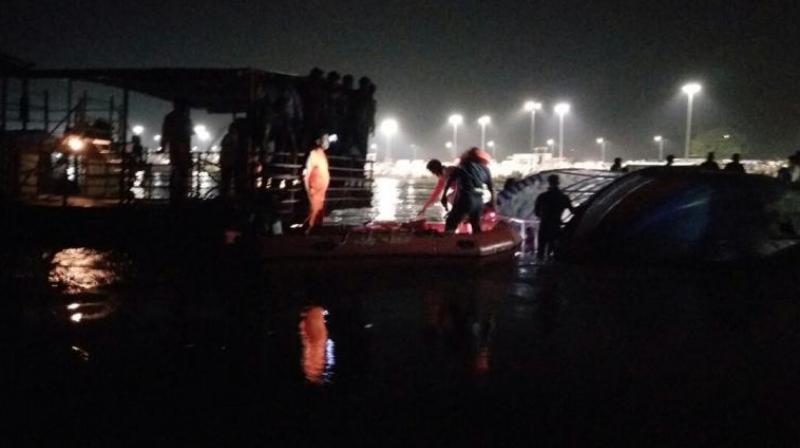 The incident occurred around 5.45 pm when a private tourism boat was making a trip from Punnami Ghat. (Photo: Twitter/NDRF)

Amaravati: A boat carrying 38 people capsized in the river Krishna near Vijayawada this evening, resulting in the death of 16 people while seven others are missing, the police said.

The ill-fated boat was being operated by a private company and was said to be on a trial run.

Tourism Minister Bhuma Akhila Priya ordered an inquiry into the incident and directed her department officials to ascertain whether the boat operator had requisite permissions.

The incident occurred when the boat set off for Pavitra Sangamam at Ferry village near Vijayawada from Bhavani Island, the police said.

"The boat was overloaded with 38 people and most of them were not provided life jackets. It capsized near a curve as it approached the Pavitra Sangamam point and most of the people were trapped underneath and were killed," an Assistant Commissioner of Police said.

Most of the passengers were said to be members of the Ongole Walkers Club in Prakasam district while some were from Nellore who were on a visit to Vijayawada.

Local fishermen at Ferry swung into action immediately and rescued 15 passengers. Later, 16 bodies were fished out of the river.

Two teams each comprising 30 NDRF personnel, a 45-member team of the State Disaster Rescue Force (SDRF) and 60 members of the Disaster Response and Fire Services Department have been roped into the rescue operation.