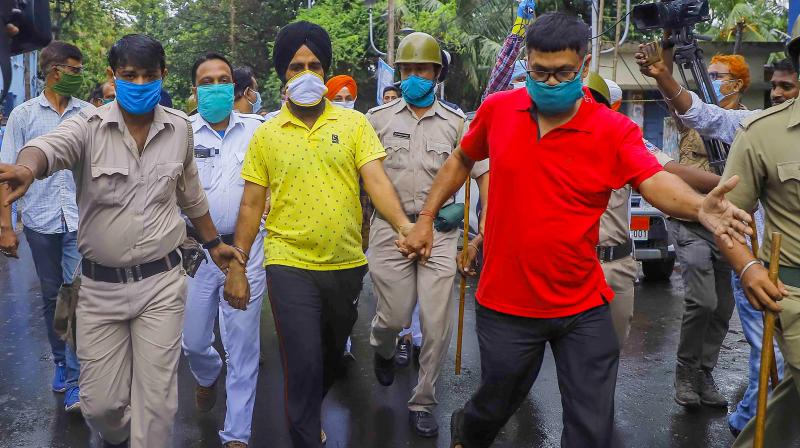 Balwinder Singh, a Sikh man whose turban was allegedly pulled by the police and later detained during recent protest rally, arrives to appear in a court, in Howrah district, Sunday, Oct. 11, 2020. The police, however, argued that the man was carrying a firearm and that his headgear "had fallen off automatically in the scuffle that ensued". (PTI)

Kolkata: The Mamata Banerjee government on Sunday complained of a "communal twist" in the BJP's claim of religious insult of one of its leader's Sikh bodyguard: Balwinder Singh whose turban was allegedly pulled  when he was lathi-charged by the police personnel before his arrest with a gun in Howrah during "Nabanna Abhijan" on October 8.

The state home department tweeted, "Our Sikh brothers and sisters live here in West Bengal in perfect peace and harmony, in happiness and tranquility, with respect from all of us for their faith and practices. A recent incident when one isolated individual got caught with one illegally carried firearm amidst agitationists in an agitation that was not authorized is now being twisted out of context,being distorted,and being given communal colors in fractious and partisan interest."

It added, "One political party is giving communal colour to the subject in narrow partisan interest in a manner that Bengal does not believe in. Policing was done as per law, but highest respect for the Sikh panth and ways from GOWB is affirmed."

The state government's statement came a day after members of the Sikh community took out protest rallies across the city demanding an explanation and apology from the state police while the BJP continues to mount pressure on the ruling Trinamul Congress over the row although the state police earlier claimed, "The Pagri had fallen off automatically in the scuffle that ensued,without any attempt to do so by our officer."

Balwinder (43), of Bhatinda in Punjab who earlier served the 6 Parachute Regiment (Special Forces) in the Indian Army and National Security Guard, is the personal security officer of BJP leader Priyanshu Pandey. He was arrested by the police after a pistol was recovered from his possession during the rally.

The gun licence was issued by the district magistrate of Rajouri in Jammu and Kashmir but its permit is restricted to Rajouri only though the licence has been renewed through 2021, the police said.

Balwinder was remanded by the Howrah Court in police custody for three days initially. His police remand was extended for eight more days by the court after his production on Sunday.