Swaraj, at a meeting of Shanghai Cooperation Organisation's Heads of Government Council, urged members to promote connectivity and peace. 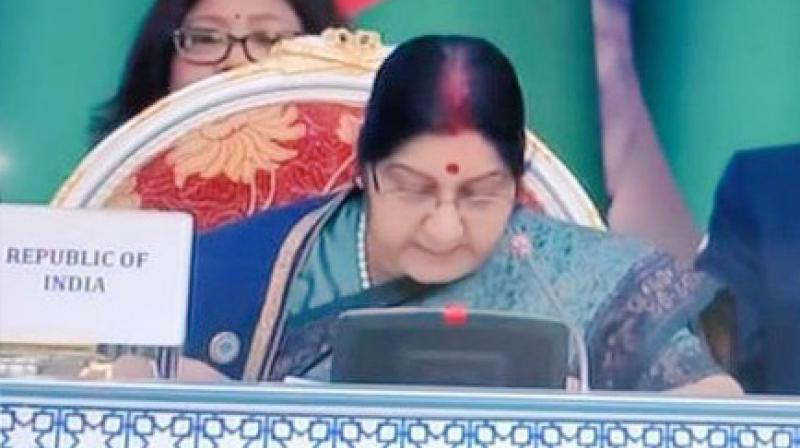 Swaraj, who is here to attend a two-day conclave of the Shanghai Cooperation Organisation (SCO)'s Council of Heads of Government (CHG), called on Tajikistan President Emomali Rahmon along with the heads of delegation from other SCO countries. (Photo: Twitter | @MEAIndia)

Swaraj, who is here to attend a two-day conclave of the Shanghai Cooperation Organisation (SCO)'s Council of Heads of Government (CHG), called on Tajikistan President Emomali Rahmon along with the heads of delegation from other SCO countries.

Coming together to address global challenges.

The conclave, also attended by Pakistan's Foreign Minister Shah Mahmood Qureshi, will focus on boosting cooperation in fighting terrorism, besides deliberating on pressing regional and global issues. The CHG meeting is also likely to review situation in Syria, Afghanistan and the Korean peninsula. It is the second CHG meeting since India became a full member of the SCO in June 2017.

India was an observer at the SCO since 2005 and has generally participated in the ministerial-level meetings of the grouping which focus mainly on security and economic cooperation in the Eurasian region.

India became a full member of the China-dominated grouping last year and New Delhi's entry into it is expected to increase the bloc's heft in regional geo-politics and trade negotiations besides giving it a pan-Asian hue.

Along with India, Pakistan was also granted membership of the SCO last year.

The SCO was founded at a summit in Shanghai in 2001 by the presidents of Russia, China, Kyrgyz Republic, Kazakhstan, Tajikistan and Uzbekistan. India and Pakistan became its members last year. The bloc currently has eight member countries which represent around 42 per cent of the world's population and 20 per cent of the global GDP.

Prime Minister Narendra Modi led an official delegation to the SCO Summit in Chinese city of Qingdao in June.