Of John Harvard and ‘Veritas’: An Ivy League campus tale

Harvard University was officially founded by a vote by the Great and General Court of the Massachusetts Bay Colony. 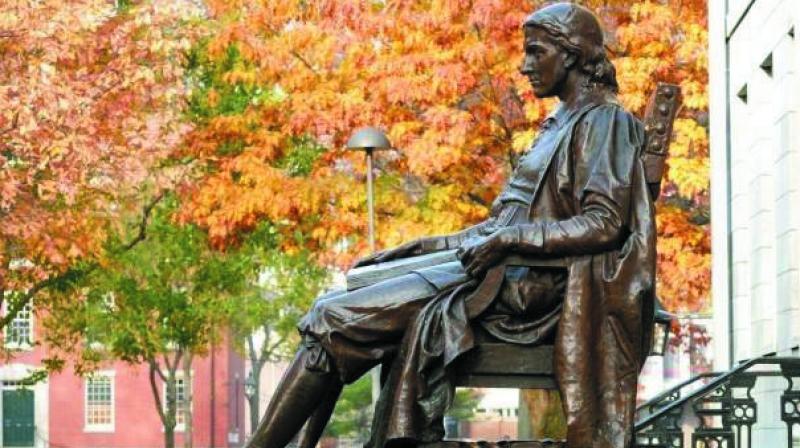 The statue of John Harvard at Harvard Yard

In the summers of 1982 and 1983 I used to work on the Harvard University campus as an academic adviser to international students. One of the first things I used to do is to give the incoming foreign classes a brief history of the university and a tour of the campus. I used to enjoy these sessions and pointed many now famous alumni to courses, and I also used to get calls from several well-known faculty members to send them “interesting” students. Presumably, I was considered good at the job, as the university made it an all-year assignment, which meant I could continue with my studies and get paid as well. My tour always began with the statue of John Harvard at Harvard Yard, and an explanation of the logo — Veritas.

The John Harvard statue is a mainstay of Harvard Yard. Every day, students rub his toe on their way to class, hoping that it will give them luck on their next hard exam. As tours pass through the Yard, people stop to get a picture with one of the best-known landmarks on campus.

In Roman mythology, Veritas, meaning truth, was the goddess of truth, a daughter of Saturn and the mother of Virtue. It was believed that she hid in the bottom of a holy well because she was so elusive. Her image is shown as a young virgin dressed in white. Veritas was indeed elusive, even at Harvard.

But the statue is not all that it seems. It is actually nicknamed the “statue of three lies” because of all the inaccuracies inscribed on it. Here is the truth behind the statue:

In 1884, Daniel Chester French created the famous statue, and Sherman Hoar sat as a model for the head of John Harvard. Hoar later went on to serve as a member of Congress and a US district attorney.

What? Yes, that’s right. The engraving on the statue states “founder,” but this is also not true. Actually, Harvard didn’t even attend the college. He was the first major benefactor to the university. He donated half of his estate and his library, which consisted of over 400 books.

Harvard University was officially founded by a vote by the Great and General Court of the Massachusetts Bay Colony.

Wrong again. Harvard University was founded in 1636. This gives Harvard the honour of being the oldest institution of higher education in the United States. (The oldest university in the world is Ahvaz Jundishapur University of Medical Sciences in Khozettan, Iran, which was founded around 200 BC.)

Harvard was originally called the New College. And its mission was to train the clergy. Harvard received its official famous name on March 13, 1639, named after the renowned benefactor seated in “lies.”

I used to often be asked about post-Harvard job opportunities. I used to jocularly reply that “veritas” should be replaced with “lucritas”, as most Harvard grads usually ended up with lucrative jobs and invariably started on higher salaries than their contemporaries from other institutions.

On my Commencement Day (graduation day), I attended a talk at Lowell House, where I was a Member of the Senior Common Room — akin to a tutor — by Kermit the Frog, Jim Henson’s famous muppet. Henson spoke through Kermit and Kermit’s advice was to “treat Harvard like a travel agent and see the world!” That I have done.