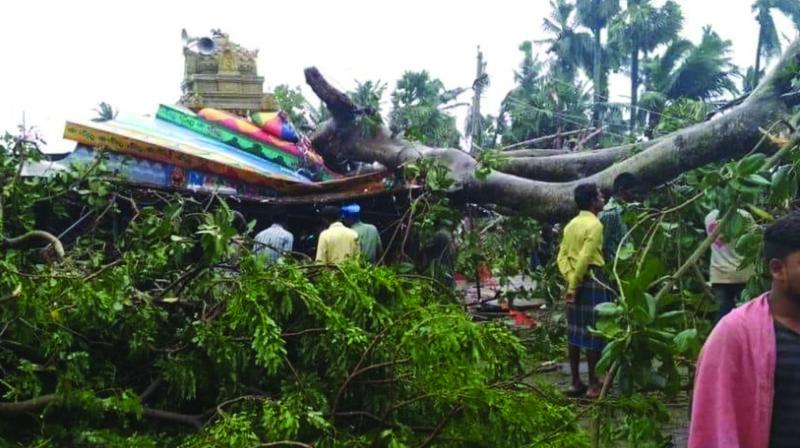 A very severe cyclonic storm packing winds of up to 150 kmph and widespread rains hit eastern India on Thursday, killing eight people in Andhra Pradesh and damaging homes, uprooting trees and power lines in the state and in Odisha. As many as six people, including four members of a family, also went missing in Odisha.

Cyclone “Titli” made landfall on the eastern coast early on Thursday, wreaking havoc mainly in Srikakulam and Vizianagaram districts of Andhra Pradesh and Odisha’s Gajapati and Ganjam districts.

Traffic on the Chennai-Kolkata National Highway was hit after the uprooted trees blocked some sections of the road, according to officials.

While no loss of lives was reported in Odisha, the “very severe” cyclonic storm left a trail of destruction uprooting trees, electric poles and damaging hutments in the affected districts.

Reports said, four members, including two elderly persons of a family, in a village in Odisha’s Ganjam district were swept away in flood waters when they were sitting on the top of their Indira Awaas house. Two others of another family went missing after their house was completely washed away in the flood waters of Adangi river. The cyclonic storm system is now moving northeastwards towards Gangetic West Bengal across Odisha and will weaken gradually, the IMD said.

While a 62-year-old woman died at Gudivada Agraharam village after a tree fell on her, a 55-year-old man died in a house collapse at Rotanasa village in Srikakulam district, the SDMA said.

The Andhra Pradesh chief minister’s office said the other six killed were fishermen who had ventured into the sea.

Of the 67 fishing boats that had gone into the sea over the last few days from Kakinada in East Godavari district, 65 had returned to the shore safely, the CMO said., adding efforts were on to bring back the remaining two boats.

The Eastern Power Distribution Company, that caters to the electricity needs of the north coastal districts of Andhra Pradesh, reported that the distribution system for 4,319 villages and six towns in Srikakulam district was affected.