However, the case load has been spurting in the past few days 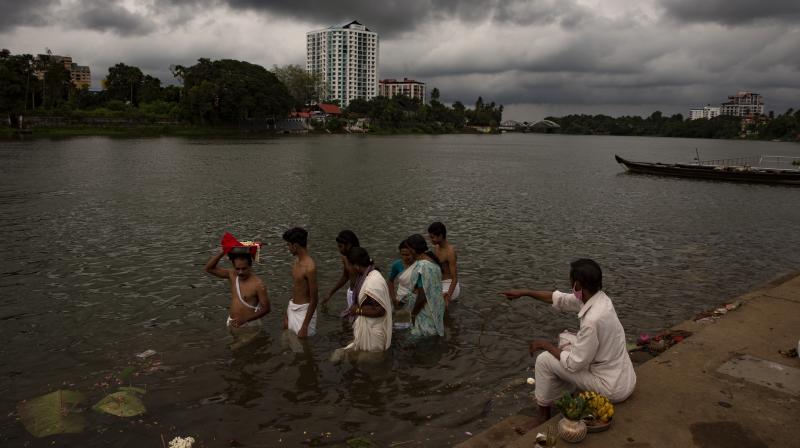 A man wearing a mask as a precaution against the coronavirus sits and guides as a Hindu family performs the last rites of a deceased relative on the banks of the Periyar river in Kochi, Kerala. (AP file photo)

Kochi/Thiruvananthapuram: Kerala’s COVID-19 count has crossed the one lakh mark more than seven months after the detection of the country's first coronavirus case, a medical student back from Wuhan, on January 30.

While the one lakh mark was breached in several states months ago and Covid-19 intensity has been only simmering in intensity in Kerala, there are signs that the epidemic is gaining momentum again. In the past three days, new cases daily have been around the 3000 mark.

Among the new cases detected are those of E P Jayarajan, the industries minister, and his wife. They have both been admitted to the Government Medical College at Pariyaram. Finance minister T M Thomas Isaac, who tested positive last week, is in quarantine.

Chief minister Pinarayi Vijayan who went into quarantine after Isaac tested positive was found negative. This is the second time the chief minister has been subjected to a Covid test.

In the past several weeks, nearly 95 per cent of the new cases have been locally acquired infections; the number of imported cases has fallen low, unlike in the early days of the outbreak when foreign infections were the norm. Of the 2,988 fresh cases reported on Friday, only 179 patients had travel history.

Kerala's mortality rate, however,  is relatively low, 0.4 per cent, compared to 4-10 per cent in the other states.

There has been a considerable increase in the testing rate with nearly 40,000 tests being done per day.

At present 2.03 lakh persons are under surveillance of which 1.81 lakh are under home/institutional quarantine.