The party has been hit with resignations in Goa, Karnataka and Assam. 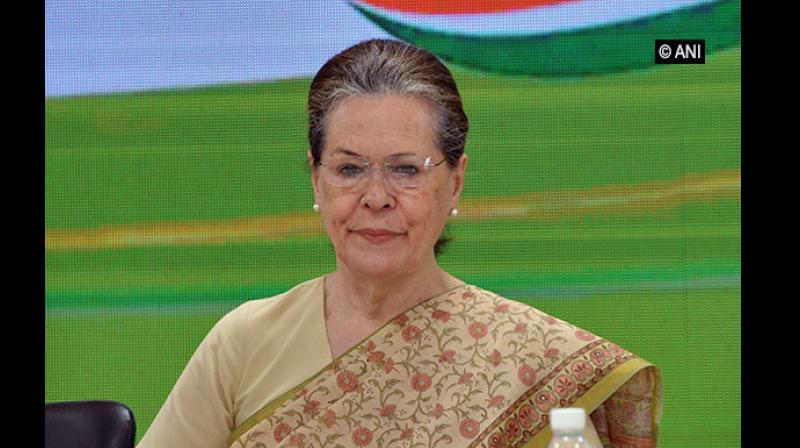 Sonia Gandhi admitted that the resolve and resilience of party workers will be under severe test in the electoral battles ahead but their self-confidence should not falter. (Photo: ANI)

New Delhi: With a slew of resignations hitting the Congress over the past few months, party chief Sonia Gandhi on Thursday took a dig at the leaders who had gone out and said they had have revealed "their opportunistic character".

In her opening remarks at a meeting of party general secretaries, state unit chiefs and Congress legislature party leaders, she said the party faces challenges and it will become clear who were devoted to Congress ideology and those who looked at the party for their self-advancement.

Gandhi admitted that the resolve and resilience of party workers will be under severe test in the electoral battles ahead but their self-confidence should not falter.

"Our resolve and resilience is under severe test. We cannot afford to let our self-confidence and morale falter. This is the time when it will become clear - as to who are those steadfastly devoted to the Congress as an ideology (as a vehicle), for strengthening the nation, - and those who look to the Congress only as an opportunity for self-advancement. Some of our party colleagues have left us in recent times. All I can say is that they have revealed their opportunistic character," she said.

Leaders have left the Congress across states. Actor-turned-politician politician Urmila Matondkar and former minister Kripashankar Singh were the latest to quit on Tuesday in poll-bound Maharashtra. Two other senior leaders of Congress and former Maharashtra ministers Harshavardhan Patil and Radhakrishna Vikhe Patil have also joined the BJP.

The party has also been hit with resignations in Goa, Karnataka and Assam.

Congress MLAs and those of Janata Dal-Secular in Karnataka created a political crisis which led to the fall of the coalition government in July this year.

Former AICC secretary Tom Vadakkan had left the party ahead of Lok Sabha polls. The party faced its second successive Lok Sabha defeat earlier this year and could improve its 2014 tally only by eight seats.