Made ‘comprehensive settlement’ offer before Karnataka HC to pay off dues: Mallya

According to Mallya, he and UBHL filed application in Karnataka HC in June 2018, setting out available assets of approx Rs 13,900 crores. 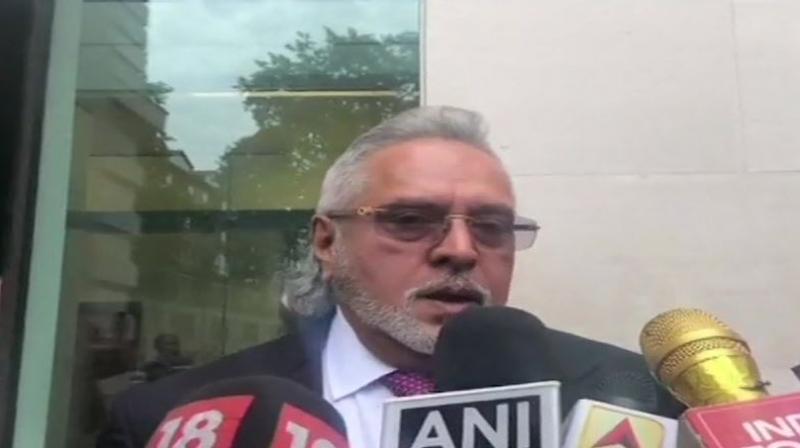 Vijay Mallya is fighting extradition to India on charges of fraud and money laundering amounting to around Rs 9,000 crores. (Photo: Twitter | ANI)

Mumbai/London: A defiant Vijay Mallya, who is facing money laundering charges in multi-crore fraud case in India, said on Wednesday that he had made a "comprehensive settlement" offer before the Karnataka High Court that will help in paying off all his dues.

The remarks by Mallya came as he arrived at the Westminster Magistrates' Court for a hearing in his extradition case, during which the judge is expected to review a video of the Mumbai jail cell prepared by the Indian authorities for the embattled liquor tycoon.

The 62-year-old former Kingfisher Airline boss, who has been on bail on an extradition warrant since his arrest in April 2017, responded to the swarm of reporters gathered outside the court in his characteristic manner, saying the "courts will decide".

"As far as I am concerned, I have. I hope the honourable judges will consider it favourably; everybody gets paid off and I guess that's the primary objective,” said Mallya, who is fighting extradition to India on charges of fraud and money laundering amounting to around Rs 9,000 crores.

According to Mallya, he and the United Breweries Group (UBHL) have filed an application in the Karnataka High Court on June 22, 2018, setting out available assets of approximately Rs 13,900 crores.

They have asked the court for permission to allow the sale of assets under judicial supervision and repay creditors, including the Public Sector Banks such amounts as may be directed and determined by the Court.

The extradition trial, which opened at the London court on December 4, 2017, is aimed at laying out a prima facie case of fraud against Mallya.

It also seeks to prove there are no "bars to extradition" and that the tycoon is assured a fair trial in India over his now-defunct Kingfisher Airlines' alleged default of over Rs 9,000 crores in loans from a consortium of Indian banks.

In separate legal proceedings, the businessman lost his appeal in the UK's Court of Appeal against a High Court order in favour of 13 Indian banks to recover funds amounting to nearly 1.145 billion pounds.

The High Court order in favour of the State Bank of India (SBI) led consortium had reinforced a worldwide freezing order against Mallya's assets. It was followed by a related enforcement order in June, granting permission to the UK High Court Enforcement Officer to enter Mallya's properties in Hertfordshire, near London, where he has been based since he left India in March 2016.