The authorities said involving people at grass root level in running of democratic institutions is more important than any other issue. 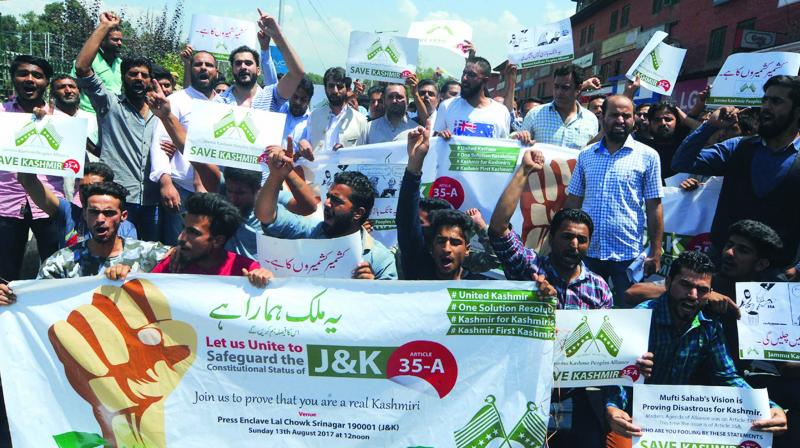 National Conference and PDP have decided to boycott local elections until the Centre clarifies its position on Article 35A of the Constitution. (Photo: File)

Srinagar: The authorities in Jammu and Kashmir have ruled out the possibility of postponing the urban and rural bodies' elections in the state in the face of boycott decision of the state's two major political parties.

The authorities said that involving people at the grass root level in the running of democratic institutions is more important than any other issue.

The state’s Chief Secretary BVR Subrahmanyam on Wednesday reiterated that the elections to panchayats and municipalities will be held as per schedule. “There will be no change in the date [of municipal and panchayat polls],” he said while speaking to reporters in Srinagar.

Earlier speaking at a function, Subrahmanyam said that there were multiple views being expressed on the issue but the government has decided to go ahead with the holding of these elections. He said, “We’ve decided that these elections will go on as per schedule. There will be no change in dates; there will no change in schedule”.

He added, “Three weeks from now, we’ll have urban body elections. (In) first week of November we will have panchayat elections.”

The Chief Secretary’s reiteration came following media reports suggesting that the much-discussed local bodies’ elections in the restive state scheduled to be held in several phases from October are likely to be deferred to January next year after National Conference (NC), the oldest political party of the State, and its arch rival Peoples’ Democratic Party (PDP) decided to boycott these elections until the Centre clarifies its position on Article 35A of the Constitution.

These parties have also said that the situation in the State is not conducive for holding these elections.

Congress, on the other hand, too has expressed its apprehension over the issue and said that the situation on the ground is not favourable for the exercise.

Parts of the state, particularly the Muslim majority Kashmir Valley, are in the grip of a separatist campaign which often turns violent. Thousands of people have been killed during the nearly three-decade-old turmoil which witnessed an escalation in the past couple of years.

The situation is extremely volatile particularly in southern parts of the Valley where the authorities could not hold by-polls to the Anantnag LoK Sabha seat which fell vacant more than two years after sitting MP Mehbooba Mufti quit on being elected chief minister of the State.

The Supreme Court had on August 31 deferred the hearing on petitions challenging the constitutional validity of Article 35A after its 3-member bench headed by Chief Justice Dipak Misra was informed by Attorney General K K Venugopal and Additional Solicitor General Tushar Mehta, representing the federal and Indian government respectively, that in view of the impending eight-phased local body elections and law and order situation in the state, the hearing be deferred.

Article 35A guarantees special rights and privileges to permanent residents of Jammu and Kashmir and thereby prohibiting non-permanent residents from a permanent settlement and from acquiring immovable properties, government jobs and scholarships in the state.

However, a petition seeking removal of Article 35A is currently pending before a 3-judge bench of the top court.

An NGO, ‘We the Citizens, believed to be an RSS think-tank, challenged 35A in the apex court in 2014 on grounds that it was not added to the constitution through amendment under Article 368 and that it was never presented before the parliament, and came into effect immediately.

“We met the Governor yesterday (Tuesday) and tried to clarify the things. But after meeting him, we learned that the Governor’s administration is confused about conducting the polls. Every hour, the decisions and policies are being changed here. There is no clarity,” he said.

He said a person who decides to join the fray will have to face many odds including life-threatening situation. “Who is going to take responsibility for that?” he asked and regretted that, so far, neither the government at the Centre nor the Governor’s administration or the election authorities have said a word on this vital issue.

Mir said that the Congress party’s core group at the state-level discussed the issue threadbare and was of the view that these elections were declared in the state without taking into consideration the situation on the ground.

It is learnt that Governor Satya Pal Malik has during his meetings with the leaders of these political parties told them that since the state is under the Governor’s rule since June 20 this year it is not right time for his administration to take a position on Article 35A or Article 370 in the given situation.

BJP national secretary Ram Madhav had on Tuesday after meeting the Governor in Srinagar said that his party is ready to contest these elections as it strongly believed this is vital towards empowering the people at grass root level. He appealed both the NC and the PDP to rethink their decisions of boycotting these elections.

He also took to Twitter to take a dig at both these parties by asking them why did not they boycott the elections to the Ladakh Hill Development Council, Kargil when Article 35A was being discussed in the Supreme Court.

He said, “We have decided to contest elections in the state, we consulted all the party leadership. @jkpdp & @JKNC_ are opportunist parties, they didn’t boycott elections in Kargil when Article 35A was in SC. It is very unfortunate, they should rethink.” Madhav hoped that the people will participate in these elections in huge numbers as “We want to transfer the power to grass level.”

The PDP while reacting to the BJP leader’s remarks said that it was the saffron party which showed “utter disregard” to the elected representatives of the state and "dishonoured" democratic institution like legislative assembly in Jammu and Kashmir.

PDP’s senior leader and former minister Syed Altaf Bukhari said, “Now boasting about decentralization of powers to grassroots level through an electoral exercise that can’t be held in an atmosphere of political uncertainty in Kashmir is preposterous and unreasonable proposition.”

He added that the objectives of devolution of powers cannot be achieved at a time when people of Jammu and Kashmir “are fraught with efforts being made to muzzle their special political identity by fiddling with Article 35A and other rights guaranteed under the Constitution”.

Bukhari alleged, “After subverting the democratic process by showing scant regard for an elected government, BJP is now trying to scratch the wounded psyche of people by pushing them for untimely municipal and panchayat elections.”

As the war of words continues, the BJP spokesman in Kashmir, Khalid Jehangir, said on Wednesday, “The PDP and the NC should introspect rather than indulging in rhetoric.” He accused the two parties of “blackmailing” the Centre over the issue of Article 35A.