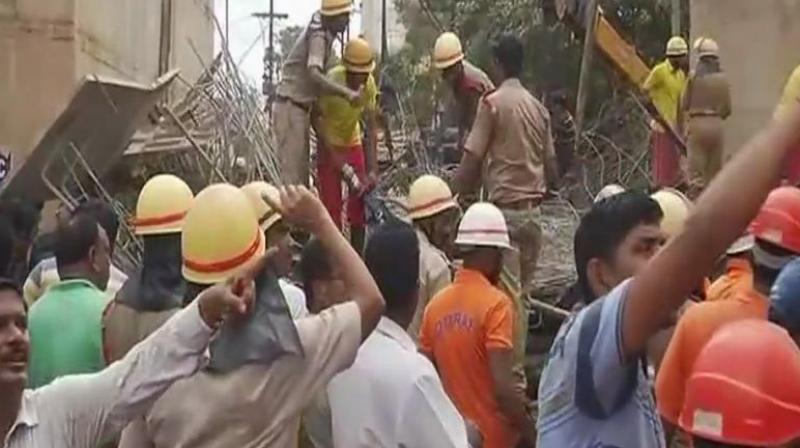 Bhubaneswar: The Bomikhal under-construction flyover collapse issue on Monday rocked Odisha Legislative Assembly as the opposition Congress and BJP members created ruckus over the matter in the House forcing the Speaker to adjourn it till 3 pm. The Opposition members had also rushed to the well of the House and shouted slogans demanding the resignation of CM Naveen Patnaik while he was making a statement in the house over the incident. The flyover had collapsed on Sunday morning.

A case has been registered against Mr Pratap Panda and two directors of the company — Sujata Panda and Santosh Panda under Sections 304, 337, 338 and 34 of Indian Penal Code (IPC) here at Laxmi Sagar police station.

As soon as the Assembly assembled for the day, the Opposition members rushed to the well of the House and shouted slogans demanding the resignation of chief minister (CM) Naveen Patnaik while he was making a statement in the house over the incident.

“One precious human life was lost and 11 persons were injured in the incident. The injured persons were immediately rushed to Capital Hospital and AIIMS, Bhubaneswar. Special arrangements were made for their treatment. Assistance of `5 lakh has been sanctioned in favour of the family of late Satyabrata Patnaik who lost his life in the tragic incident. The state government will bear the entire expenditure for treatment of the injured persons. The condition of all the injured persons is stable,” the CM said speaking to reporters outside the House.

He promised “stringent” and “exemplary” action against all persons responsible for this tragic incident, he added.

However, the CM’s statement failed to satisfy the opposition Congress and BJP members who continued to shout slogans against the state government.

“The CM is holding the works portfolio. Since, the tragic incident happened because of the fault of his department, he should own moral responsibility for this and resign from his post,” Leader of the Opposition Narasingha Mishra said.