On September 14, Abe and Modi are scheduled to lay the foundation stone for the bullet train project in Ahmedabad. 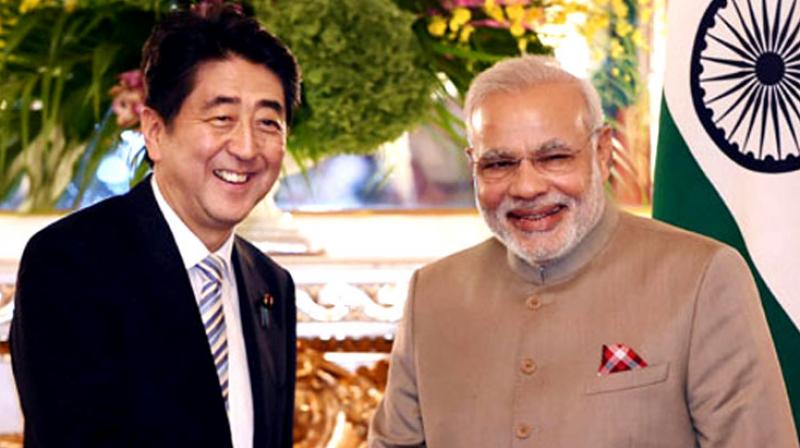 As Narendra Modi and his Japanese counterpart Shinzo Abe are also scheduled to visit Gandhinagar on Thursday, over 2,000 policemen will be deployed in the state capital to guard them and other dignitaries. (Photo: PTI)

Ahmedabad: Over 9,000 police personnel will fan across strategic locations in the city to secure it for the two-day visit of Prime Minister Narendra Modi and his Japanese counterpart Shinzo Abe beginning on Wednesday, officials said on Tuesday.

Tight security arrangements have been put in place as the two leaders are expected to attend several programmes over the next two days, including the annual Indo-Japanese annual Summit, they said.

As Modi and Abe are also scheduled to visit Gandhinagar on Thursday, over 2,000 policemen will be deployed in the state capital to guard them and other dignitaries.

Soon after their arrival at the airport on Wednesday afternoon, Modi and Abe would take part in an 8 km road show that would terminate at Sabarmati Ashram, where apostle of peace Mahatma Gandhi spent considerable part of his life. Later, they will visit a 16th century mosque in the evening and have dinner at a heritage restaurant in the eastern part of the city.

According to Balram Meena, Deputy Commissioner of Police (DCP), Control Room, around 70 per cent of the city's police force will be deployed as part of the security arrangements on Wednesday.

"To provide enhanced security, we will also deploy 12 companies of the state reserve police (SRP), bomb squad and quick Response teams. We have also sent a request to send a team of NSG commandos. They may also join us," he said.

According to Meena, the city police on Tuesday performed a rehearsal along the entire route of the road show using the same number of vehicles that would be part of it on Wednesday to see how much time it would take and what are the areas where improvement is needed.

On September 14, Abe and Modi are scheduled to lay the foundation stone for the bullet train project in Ahmedabad before attending the India-Japan Annual Summit at Mahatma Mandir in the evening.

As many as 10,000 people would attend the ground-breaking ceremony for the bullet train project to be held at the Athletics Ground near the Sabarmati Railway Station in the city.

"We will deploy one IG-level officer along with six Superintendents of Police (SP)-level officers to supervise the entire security arrangements. Others, who will be deployed across Gandhinagar include, six assistant SPs, 35 deputy SPs, 70 inspectors, 150 sub-inspectors and 1,800 other policemen," Jadeja said.