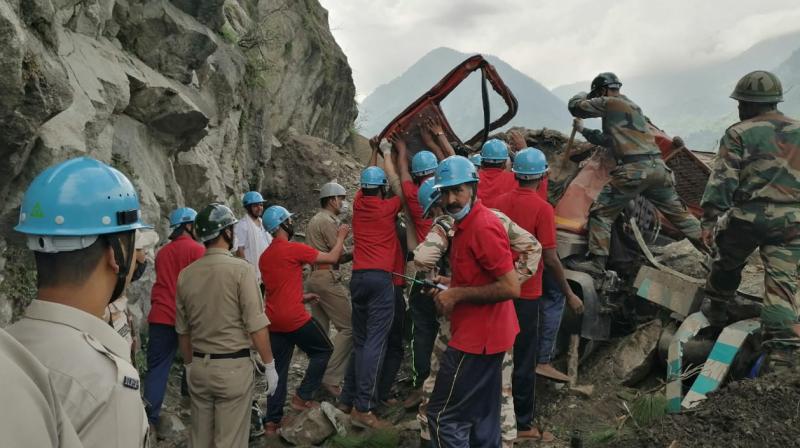 Shimla: Ten people were killed, 13 rescued and several others feared buried under debris after a landslide trapped a bus and other vehicles in Himachal Pradesh's Kinnaur district on Wednesday, officials said.

A video clip captured the horror of the moment.

First, shooting stones fell down the mountainside into the river below, creating small splashes of water.

Warming whistles were heard and then a big chunk of the mountain collapsed on National Highway 5 and into the river.

Fighting to complete the operation before nightfall, rescue workers struggled to pull out survivors and bodies from the debris near Chaura village in Nigulsari area of Nichar tehsil.

Hours after the landslide a little before noon, Kinnaur Deputy Commissioner Abid Hussain Sadiq told PTI that 10 bodies had been pulled out and others were feared trapped.

Eight of the dead were found trapped in a Tata Sumo taxi, according to state disaster management director Sudesh Kumar Mokhta.

A Himachal Road Transport Corporation (HRTC) bus, which was on its way from Reckong Peo to Haridwar via Shimla, was still buried under the debris, he said.

The official said the number of the dead may further increase as another HRTC bus and a Bolero and its passengers were not found under the debris and are still untraceable.

It might be possible that both the vehicles rolled down with the debris, he added.

Meanwhile, the authorities suspended the search operation at around 10 pm and it will be resumed Thursday morning.

Mokhta also said that a Tata Sumo has been found in which eight persons were found dead.

He said a truck rolled down towards a riverside due to shooting stones and the driver's body has been recovered.

A fully damaged Alto car has also been recovered, he said, adding that no one was found inside the car.

Early reports said there could be up to 40 people in the state-run bus.

Earlier, the Bhawanagar station house officer (SHO) said around 25 to 30 were trapped under the debris.

When the initial reports came, Himachal Pradesh Chief Minister Jai Ram Thakur told the state assembly that 50-60 people were feared trapped under the debris, but the exact number was not known.

He said Union Home Minister Amit Shah talked to him and the topmost priority as of now was to rescue those trapped and provide them the best possible treatment.

"PM @narendramodi spoke to Himachal Pradesh CM @jairamthakurbjp regarding the situation in the wake of the landslide in Kinnaur. PM assured all possible support in the ongoing rescue operations," the Prime Minister's Office (PMO) said.

Shah also spoke to Thakur to take stock of the situation and directed the Indo-Tibetan Border Police (ITBP) to provide all assistance to the state government in rescue and relief operations.

Thakur told the Assembly that a helicopter was also being arranged for the rescue operation.

The chief minister said the landslide occurred when there was no rainfall.

Among the dead are a two-year-old girl and five women, a state official spokesperson said.

Two of the dead were identified as Rohit Kumar (25), a resident of Kaiya village at Rampur in Shimla; and Vijay Kumar (32) of Jhol village in Sujanpur of Hamirpur district, Mokhta said.

The eight dead found in Tata Sumo have been identified as two-year-old girl Vanshuka of Sapni in Sangla tehsil of Kinnaur; Meera Devi, Nitisha, Prem kumari (42), Gyan Dassi, Devi Chand (53), all from Kinnaur district; and Kammlesh Kumar (34) of Rechuta village in Solan.

One dead person is yet to be identified, Mokhta added.

They have been shifted to a Bhawanagar community health centre (CHC) for treatment, officials added.

The state disaster management authority has requisitioned the NDRF from Nurpur for the search and rescue operation, Mokhta said.

District officials, search and rescue teams, including members of local police, home guards, NDRF, ITBP and a medical team are at the incident site, he said.

Ten ambulances, four earth removers, 52 personnel of the ITBP's 17th Battalion, 30 personnel of police and 27 NDRF personnel are carrying out the rescue operation, he added.

Officials said the bodies have been sent for autopsy.

Earlier on July 25, nine people were killed and three others injured in multiple landslides near Batseri in Kinnaur district.

Similarly on July 27, at least eight people died, two were injured and two went missing in flash floods triggered by a cloudburst in Lahaul-Spiti district.