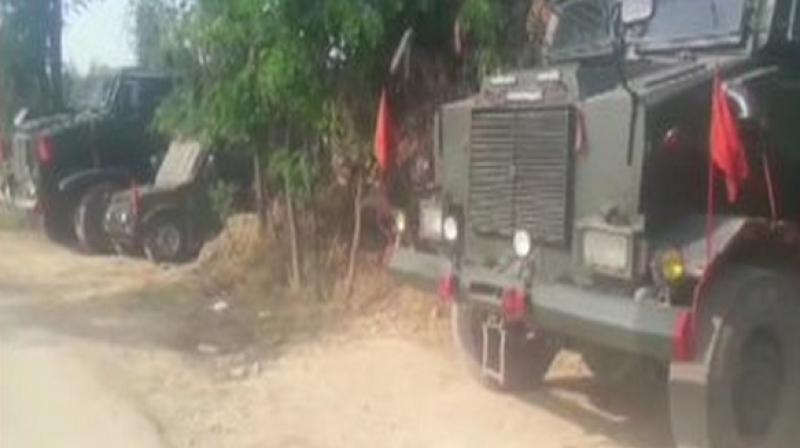 SRINAGAR: An Army jawan and a local commander of the Hizb-ul-Mujahideen were killed and another soldier was injured in a brief gunfight in Jammu and Kashmir’s southern Pulwama district on Wednesday morning.

Later during the day, militants targeted a Quick Reaction Team of the Army with gunfire at Trumgund-Hygam crossing along the Srinagar-Baramulla road, injuring, at least, one jawan of the 15 Garwal regiment.

Soon after the attack, the Army’s 52 Rashtriya Rifles was joined by men from J-K police’s counterinsurgency Special Operations Group (SOG) and the Central Reserve Police Force (CRPF) to conduct searches in neighboring villages to apprehend the assailants.

The soldier who laid down his life while fighting militants in Pulwama’s Kamrazipora village has been identified as Sowar Jilajeet Singh Yadav.

J-K’s Director General of Police, Dilbag Singh, identified the militant slain in Pulwama clash as Hizb commander Azaad Lalhari and said that he was involved in a series of terror activities, including the killing of police head-constable Anoop Singh on May 22 in the district’s Prichu area.

“There are six FIRs registered against him at various police stations. Earlier he was detained under Public Safety Act (PSA) for being an OGW (Over Ground Worker of militants) but after his release he became active again,” the DGP said.

The clash took place at Kamrazipora after the SOG, the Army and the CRPF’s 53 Battalion laid siege to the village to conduct searches.

The police and the Army said that in the initial exchange of fire, two Army jawans were injured. They were quickly evacuated to Srinagar’s 92-Base Hospital, where one of them succumbed to critical wounds. One AK assault rifle was found on the slain militant, defence spokesman, Colonel Rajesh Kalia said.

The defence spokesman said that 25-year-old old Army jawan Yadav “was leading his party when it came into contact with the terrorists at Kamrazipora”. He added, “After one terrorist was eliminated, Yadav received a gunshot wound. Despite being grievously injured, he continued to fight. He was subsequently evacuated to 92 Base Hospital, Srinagar where he eventually succumbed to his injuries”.

He said that the slain soldier was  a resident of Village Ijari of Sadar Tehsil, Jaunpur district in Uttar Pradesh and had joined the Army on March 18, 2014. He is survived by his wife Punam Devi.