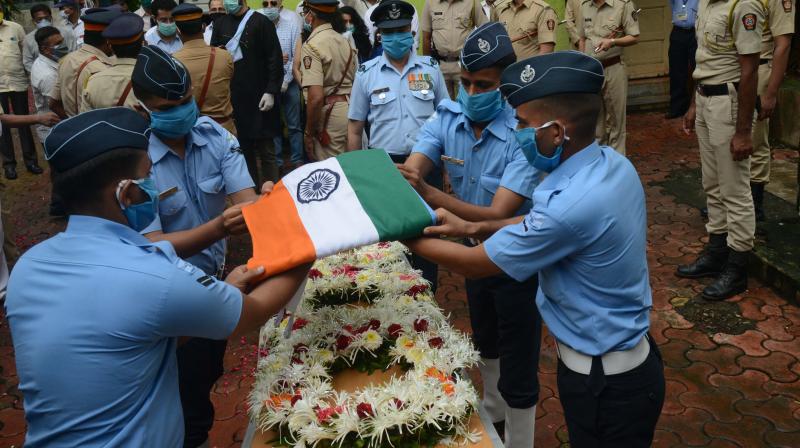 The mortal remains of captain Deepak Sathe was cremated with state honours at Tagore Nagar crematorium in Mumbai. — Photo by Rajesh Jadhav

Wing Commander Deepak Sathe (retd), pilot-in-command of the Air India Express plane that crashed at the Kozhikode airport in Kerala last week, was cremated on Tuesday with state honours. The last rites were performed at the Tagore Nagar electric crematorium in Vikhroli in the presence of his relatives, friends and the BMC mayor Kishori Pednekar.

The number of people allowed to attend the last rites was restricted in view of the Covid-19 outbreak.

Wing Commander Sathe (retd.) was showered with flowers and chants of Amar Rahe ahead of his cremation. The Maharashtra government had decided to accord a state funeral to the pilot and said his life shall inspire young pilots.

Wing Commander Sathe (retd.) lost his life in the ill-fated plane crash at Kozhikode last week. The flight from Dubai had 190 people, including a six-member crew, on board and amidst heavy rains the Boeing 737 failed to come to halt overshooting the tabletop runway and landing in a 35 feet deep ravine. The accident killed 18 people, including both the pilots.

The armed forces arranged for transfer of Wing Commander Sathe (retd.) mortal remains that was flown to Mumbai on Sunday. It was kept at the Air India facility near Terminal 2 of the Chhatrapati Shivaji international airport for some time before being taken to Bhabha Hospital in Bandra.

On Tuesday morning, the body was brought from the hospital to the family home in Chandivali. Residents of the housing complex paid tributes to the pilot. Some were seen saluting him from their balconies.

The pilot’s father, Colonel Vasant Sathe (Retd), 87 and mother Neela, 83, were present at their Chandivali residence. They reside in Nagpur and reached Mumbai on Monday.

The pilot’s US-based elder son Shantanu also reached Mumbai on Monday for the last rites along with his mother Sushma and younger brother Dhananjay. A wreath was placed on behalf of the Indian Air Force, where Sathe was a test pilot before joining Air India.