Several videos, pictures have surfaced of the similar kind, in flood hit states of Maharashtra, Gujarat and also Karnataka. 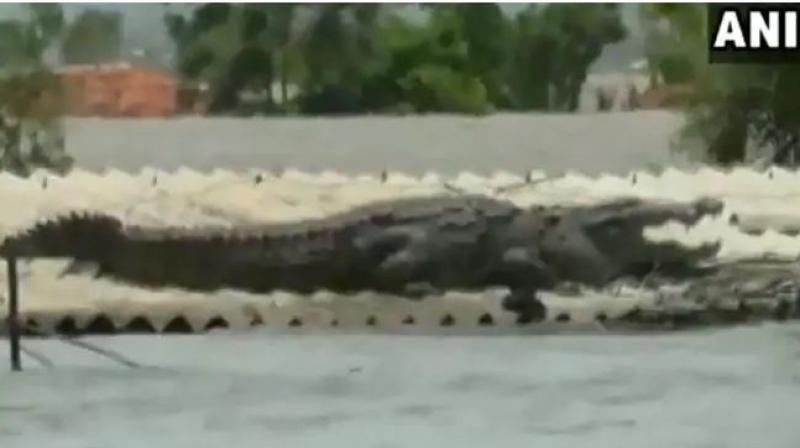 Forty people have been killed and more than six lakh have been forced out of homes in Karnataka due to floods. (Photo: ANI)

Belgaum: A video has emerged from Belgaum, one of the worst affected districts in flood-hit Karnataka, showing a huge crocodile on the roof of a house almost fully submerged in flood water.

In a 15-second video, shared by news agency ANI, the crocodile is seen sitting on the roof with its mouth open. Some people, who shot the video from a distance, can be heard talking to each-other as they capture the giant reptile on camera.

#WATCH A crocodile lands on roof of a house in flood-affected Raybag taluk in Belgaum. #Karnataka (11.08.19) pic.twitter.com/wXbRRrx9kF

Several videos and pictures have surfaced of the similar kind, with crocodiles being found in the drains in the flood hit states of Maharashtra, Gujarat and also Karnataka.

Forty people have been killed and more than six lakh have been forced out of homes in Karnataka due to floods. "Since August 1, 40 people have lost their lives, 14 people missing, 5,81,702 people evacuated, 1,168 number of relief camps have been set up and 17 districts and 2028 villages affected," the Karnataka State Natural Disaster Monitoring Centre said in a statement.