A basket hangs from the roof of one of the anganwadis that is centrally located in Bhanashivare village. 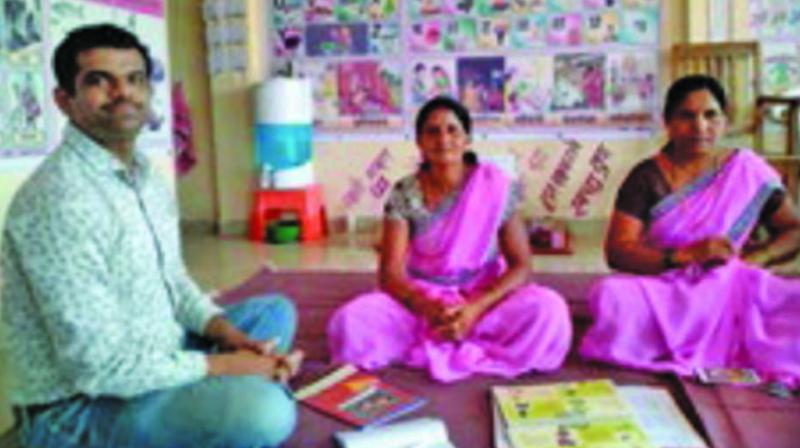 Alka Pandit (centre) is one of the leaders of the Poshan initiative.

Ahmednagar, the largest district in Maharashtra, is steeped in medieval history and spiritual fervour, and is well known as the epicentre of the sugar mills cooperative movement in the region. The district is where the visible remnants of a great medieval period sultanate after which the district is named, comfortably shares glory with the legacy of revered saints like Sai Baba of Shirdi and Meher Baba of Meherabad.

In Nevasa, a famous block where Dnyaneshwar, a Marathi poet-saint, penned Dnyaneshwari — a commentary on the Bhagavad Gita, there is a small hamlet located near the Nagar-Aurangabad highway. The hamlet has created quite a stir by coming up with unique ways to safeguard the health of its women and children. Here, good karma comes together with wholesome nutrition to bring the message of good health right at the people’s doorstep. At the centre of this endeavour are the two anganwadis, a centre that provides care to mothers and young children in rural India, and the frontline health workers employed at the anganwadis to provide service to the 4,000 residents of the hamlet.

A basket hangs from the roof of one of the anganwadis that is centrally located in Bhanashivare village. However, there is more to this humble contraption than meets the eye. It is a symbol of the camaraderie that the villagers share, even as it guarantees a hearty fare for each person who enters this government-run creche. Just as most rural homes set a basket aside in their kitchen to store bread, cooked vegetables, curd, and other food articles, similarly this anganwadi has placed one locally referred to as “akshaypatra” at the entrance where residents depending on what they can spare, donate a variety of vegetables, pulses, and other food items.

Every day, Usha Ganesh, the anganwadi worker in-charge, rummages through the food items in the basket to prepare hot meals. Then, she prepares a delicious one-dish meal of khichdi with vegetables to feed the hungry children. She says, “The concept of akshaypatra is deeply rooted in the local custom. People feel an emotional connect which is why they readily contribute legumes, dals, vegetables, herbs like coriander and fruits. We use the fresh produce and rations to make khichdi; there is quality nutrition in this rice-and-dal preparation.”

Such has been the influence of the initiative that this year, during the festival of Makar Sankranti in January when the anganwadi workers requested women to give their holy offering of fruits, vegetables, grains, sugarcane, and jujube to the anganwadi instead of giving to the temple, they loved the idea. After the haldi-kumkum ceremony, they put their offerings into the akshaypatra. Instead of wasting food — excessive temple offerings often end up in the garbage — or simply feeding it to the animals, by giving their offerings to the akshaypatra, the women have set a fine example for others to follow in their footsteps.

In a sense, the simple innovative idea that is borrowed from an old-time practice has not just strengthened the relationship between the people and the anganwadi, but has helped in improving community engagement. It has also created a sense of ownership in the movement toward ensuring better healthcare for the future generations.

At the other anganwadi too, Alka Ashok Pandit, an anganwadi worker, employs tradition and folklore to spread the word on mother and childcare, and cleanliness and hygiene at home and in the neighbourhood. Legend has it that Gadge Maharaj, a mendicant-saint and social reformer, wandered around villages across the Amravati region in Maharashtra promoting sanitation. Inspired by him, Pandit has innovated and composed keertan (praise) songs on the importance of breastfeeding, hygiene, and nutrition. For instance, to talk about breastfeeding, she has adapted a composition of Saint Dnyaneshwar, “Amrutachigodi, aaichyadudhala (Mother’s milk, as sweet as nectar).” Along with a choir of local health workers and volunteers, she takes this important message to the women.

She says, “We wanted to publicise the value of better nutrition and good health practices among the people by using keertans. We have been able to fulfil our objective. I adapt local songs to share these ideas. ‘As a cow feeds her calves with her own milk, so must mothers.’ We catch their attention through such descriptive examples. When we talk to them using their own cultural references and practices, the results are better.” The women, too, have responded to this innovative initiative and most of them are now well versed with concepts like “kangaroo care” — a method of holding a baby that involves skin-to-skin contact — and the ‘breastfeeding corner” at the anganwadi among other things. During the Poshan Pakhwada, a forthnight long nutrition awareness programme, observed on March 8-22, 2019, to mark the first anniversary of the Poshan Abhiyan, the villagers renewed their commitment to securing the health of their women and children by continually engaging with the anganwadi workers and participating in government initiatives.