India   All India  12 Aug 2019  The many faces of anaemia in Gujarat’s urban settlements
India, All India

The many faces of anaemia in Gujarat’s urban settlements

To ensure that healthy eating becomes the norm, a Mahila Arogya Samiti of about 20 women was formed for four slums. 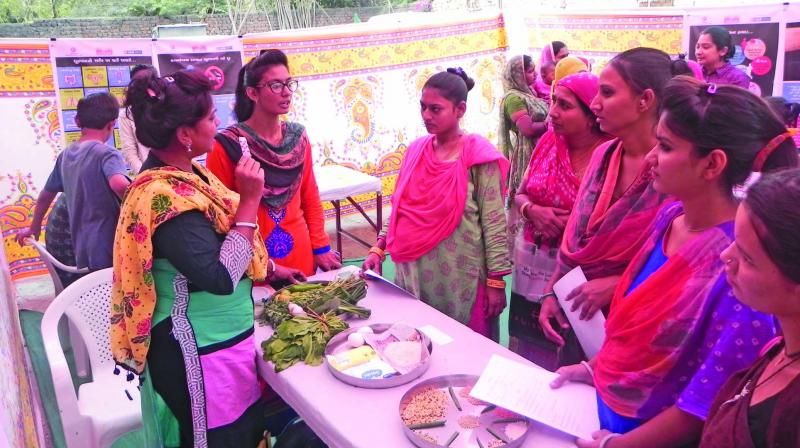 National Family Health Survey-4 data for Gujarat had shown that 32.4 per cent of the 43 per cent under-five mortality was among the urban poor.

Bhoomika Bhuthediya, 19, an adolescent of Someshwar Nagar of Vasna slums of Ahmedabad, is one of the many beneficiaries of the NGO Chetna’s intervention to provide health and nutrition facilities to 3,460 families (14,000 people) that live in the underbelly of one of the most prosperous cities of India. Though Bhoomika took her 12th exam, she flunked in economics and opted out of education. She was constantly tired, listless and often suffered from bouts of giddiness. She had no energy for anything and when her father stopped her from further education, she was happy to stay at home and help her siblings.

Two years ago, as a part of the CSR (corporate social responsibility) initiative of HDB Financial Services, Chetna (Centre for Health, Education, Training and Nutrition Awareness) was roped in to work in Vasna (West) slum. National Family Health Survey-4 data for Gujarat had shown that 32.4 per cent of the 43 per cent under-five mortality was among the urban poor. Anaemia among children and women was 60 per cent and 52 per cent respectively in those in the reproductive age group. It was during a health camp organised by Chetna this January that the story of the “drooping flower” Bhoomika came to light. While Chetna’s team surveys and tracks down pregnant women, adolescents and children suffering from various health ailments and malnourishment, it is the Urban Health Centre (UHC), the equivalent of the PHC in rural areas, for urban slums, that provides medicines and healthcare and the Ahmedabad Municipal Corporation provides the nutritional support. At the large UHC, there is a general OPD, laboratories for blood and other tests and services. All that the residents have to do is to get themselves registered by paying `5. The NGO, which has close to 38 years of experience in delivering maternal health and nutritional support in difficult areas, is the link between the slum dwellers and the UHC. It ensures access and a smooth relationship between the poor, illiterate and sick and the UHC and its doctors.

Bhoomika’s blood test revealed her haemoglobin was just 3.4, as against the normal 12, accounting for her inertia. For the next three months, Chetna’s field staff of Hetvi, Shyam and Mayur and the project leader Dr Meeta Shah took charge of Bhoomika’s diet. They ensured she had proper meals of rice, dal, sprouted gram, vegetables and chaas (buttermilk). Twice a day for three months, after her meals, she had iron tablets with lemon water which helped in the assimilation of the tablets. Today, her haemoglobin is a respectable 10.5 and she is learning to relish home cooked food instead of factory-made potato chips that she ate earlier. She still does not like sprouted moong, rich in proteins, and many of the seasonal vegetables but she does like brinjal, which is a good source of iron. Stronger now, she wants to go out and work like girls of her age and is hoping the team will speak to her parents.

The number of home deliveries in Vasna is on the decline and pregnant women are coming in for folic acid tablets and the four anti-natal checkups mandated before the birth of their babies. The densely populated area, with 12 to 15 people in the joint family, has a large number of migrants from Rajasthan, Odisha, Uttar Pradesh and Bihar. The men work as construction labour, daily wagers, drivers and some run small businesses. Women work as domestic  and construction labourers. The area does not have proper sanitation and water and there is reportedly high incidence of TB and HIV. There is extensive chewing of tobacco and even pregnant women have gutka and other addictives. 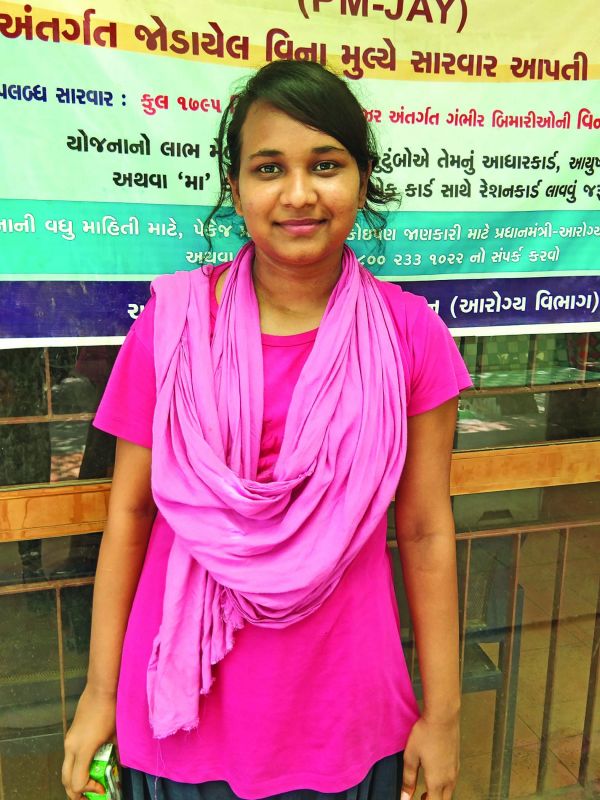 Chetna’s changemakers are working with the residents of Ahmedabad’s Vasna slums and have succeeded in making a difference to their health, food habits, lifestyle and general well-being. Many of the beneficiaries have now joined the effort themselves.

Dariyaben, 35, from Rajasthan is a mother of five and anaemic like Bhoomika. Trying to fulfil the family’s desire for a son, she had four daughters and the youngest, six months old, is a son. After his birth, she was keen on a tubectomy but was advised against it because of anaemia . The Chetna team took her under their wings, counselling and ensuring she has iron tablets and nutritious meals. Though she had four children earlier, Dariyaben did not realise she was pregnant the fifth time. It was extensive bleeding that took her to the doctors who confirmed her pregnancy of almost two months. She was kept in the hospital for five days and treated for anaemia. The UHC fussed over her, provided her a Mamta card that indicated the status of her health and alerted her about her appointment with doctors. In her seventh month, there was a traditional godbharayi function organised by Chetna. She was felicitated and the ambulance number was provided to enable her to reach the hospital for her delivery. The son born was a normal 2.7 kg at birth but Dariyaben continues to be anaemic. Now, not only does she advise other pregnant women about staving off anaemia with iron tablets but is slowly introducing her son to semi-solid food like khichdi and moong. With the hand-holding by Chetna, she is waiting for the day when she is strong enough for a tubectomy.

Another beneficiary of a health intervention is the four-year-old Survir, son of Ramila, 32, a resident of the Srinagar urban slum of Ahmedabad and mother of four children of seven years to one and a half years. Every 15 days, Survir would fall sick with diarrhoea and vomiting. She would take him to private doctors and spend Rs 500-600 on his treatment. Till Chetna’s intervention, he was living on glitzy packets of snacks. One day, Shyam and Minisha, field workers of Chetna, visited her home and persuaded her to come to the Urban Health Centre. Survir was treated for diarrhoea then put on a nutritious and healthy diet of semi-solid suji halwa with jaggery, nutri-biscuits and a sweet and sour bajra namkeen. This was given on alternate days for two months. Then slowly he was shifted to normal, healthy home food of rice, dal, green vegetables and sprouted gram. It was a struggle to wean him away from the chips and packaged namkeens. Now his grandmother makes him a tasty but nutritious snack of groundnuts and gram. 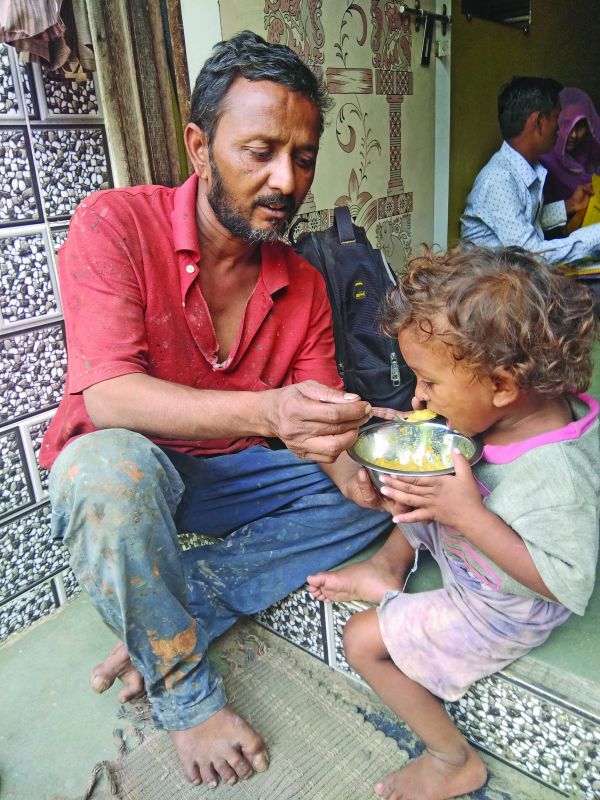 Ramila was spending Rs 50-60 every day on chips and packaged snacks that all slum kids are addicted to. Survir now goes to the anganwadi centre and is learning to read as well as eat better. Ramila is sharing her knowledge with other mothers on the importance of home cooked food.

In the urban slums, children are succumbing to the lure of potato chips, kurkure and papad. Their stomachs are full but there is no nutrition in what they have eaten, says Dr Meeta Shah. In its area of intervention, Chetna has given home cooked food to 174 undernourished children — rab or sheera or suji and millet biscuits for about two months before introducing them to regular home cooked food. To ensure that healthy eating becomes the norm, a Mahila Arogya Samiti of about 20 women with leadership qualities was formed for four urban slums. Though working on a voluntary basis, they were trained on child nutrition, cleanliness in their personal lives as well as in their vicinity. They also learnt how to apply to the corporation for their entitlements and services like cleaning drains, repairing electric lines and leaking taps. After their training in 2017, they have been meeting every month to prioritise issues to be taken up and look at the status of women and children under their watch. A refresher course was held this February. These changemakers are pulling women out of patriarchal cages to get a fair share of the food cooked at home. 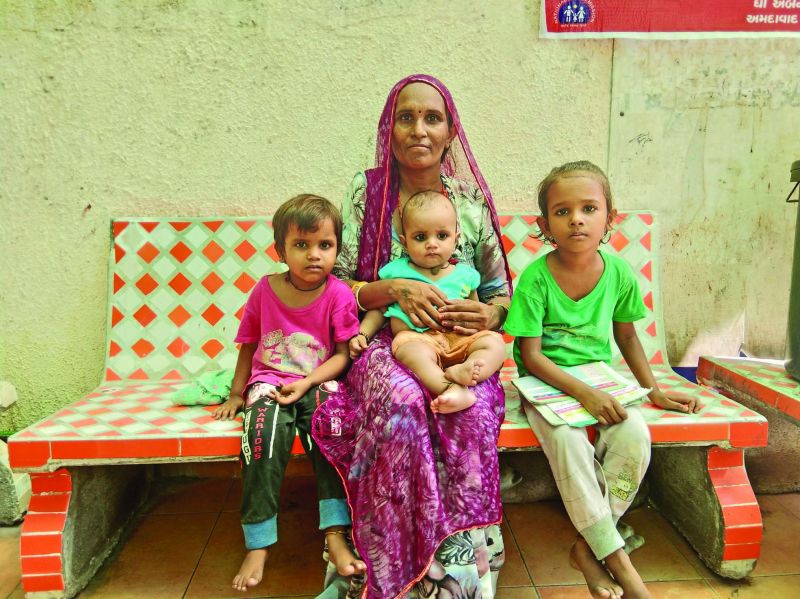 “We need to be strong ourselves to be good homemakers.” Poonam, a member of the MAS, says that with their intervention, even the slums are looking cleaner and there is less illness. “Though there is no money,” says Rekha, “we are enjoying the work, meeting each other,  the knowledge gained and our enhanced importance as grassroots leaders.”