The lunch was hosted for students from various universities of Punjab, as they were away from home on the occasion of Eid al-Adha. 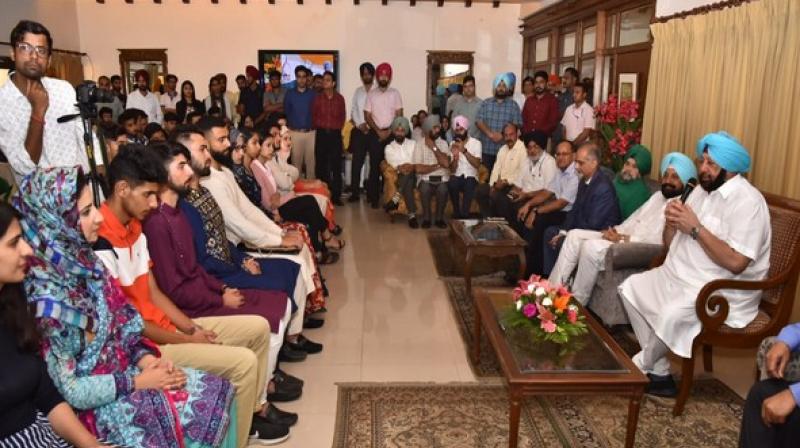 Chandigarh: Punjab Chief Minister Captain Amarinder Singh on Monday hosted lunch for around 125 Kashmiri students on the occasion of Eid al-Adha at the state Bhavan here.

The lunch was hosted for students from various universities of Punjab, as they were away from home on the occasion of Eid al-Adha. They could not go to Kashmir due to restrictions imposed in the wake of the abrogation of Article 370.

Assuring students that he was confident things would improve soon in Kashmir, the Chief Minister said, "We cannot replace your families but I hope you consider us as your family too."

Amarinder also assured them of their safety and security in Punjab, and called Jammu and Kashmir his "second home".

Reciprocating the Chief Minister's sentiments, the students said they too considered Punjab their "second home" as they had always felt safe in the state, even after the ghastly Pulwama attack that killed 40 CRPF personnel.

"We have seen that Punjabis have a big heart," said a student, Faiq Salem, while another thanked Amarinder for listening to them.

"Coming here today reminds us of our families," said Farzana Hafeez, another student, admitting that till they received the invitation, they had been feeling very lonely at the thought of not being home for Eid.

As a memento of their love and respect, the students, who attended the lunch, gifted the Chief Minister a portrait sketched by Abdul Azad, a Fine Arts Kashmiri student from Chandigarh University. Amarinder also gave sweets to the students to celebrate the occasion.

Jammu and Kashmir marked its first Eid today after the abolition of Article 370 that had granted special status.

Large parts of Jammu and Kashmir have been under a security lockdown since last week. This happened after the Centre abrogated Article 370 from Jammu and Kashmir and decided to divide the state into two union territories.

Bakra Eid or Bakrid is marked by sacrificing an animal that is close to them to prove their devotion and love for Allah.