Scindia has been marginalised in the Congress in Madhya Pradesh by his purported rival factional leaders in the party. 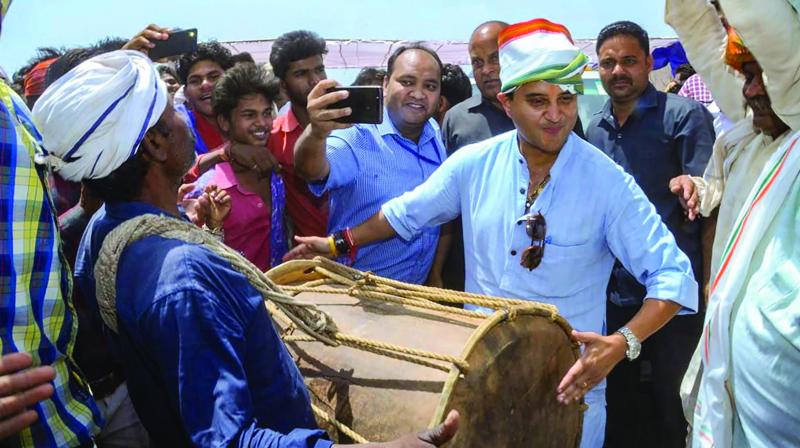 A file photo of Congress general secretary and Guna-Shivpuri Lok Sabha candidate Jyotiraditya Scindia beating a traditional drum during a rally for the Lok Sabha polls at Bamori in Madhya Pradesh. (Photo: PTI)

Bhopal: AICC general secretary Jyotiraditya Scindia has set the rumour mills working overtime on his future political plan as he has supported the Centre’s move to abrogate Article 370 according special status to Jammu and Kashmir, in deviation from the party line.

Mr Scindia who has been sulking ever since he ‘lost’ the chief minister’s post to veteran leader Kamal Nath after the Congress rode to power in Madhya Pradesh in November, 2018 Assembly elections, dropped a bombshell in political circles here when he declared his unequivocal support to the Bill.

The scion of former royal family of Gwalior, known for his proximity to AICC president Rahul Gandhi, has set alarm bells ringing in his party by opposing the Congress’ stand on Article 370, considered very sensitive to the first family of the party.

Fuelling speculations on his political plan further, Congress spokesman Pankaj Chaturvedy, considered a staunch loyalist of Mr Scindia backed his leader, saying, “I fully support him (Mr Scindia) on his stand on Article 370.”

“Article 370 was a demand of the situation 70 years back. Its revocation is the demand of current situation. It (abrogation of Article 370) is like other 100 amendments done in the Constitution over a period of time. Change done according to the need of time is fully justified,” Mr Chaturvedy said in his Tweeter post, making it clear that Mr Scindia’s stand on the vexed issue was not ‘accidental’.

“Something is surely cooking in the Gwalior palace politics,” a senior Congress leader here observed.

Sources said Mr Scindia has virtually thrown a challenge at the Central party leadership by making an independent position on a sensitive issue like this, dropping enough hints that he would no longer risk his political career by being overlooked by it.

Although a section of party here view Mr Scindia’s stand as part of ongoing war between young VS old leaders in the Congress, a senior Congress leader did not rule out possibility of the AICC general secretary taking a radical step like breaking away from the Congress in the interest of his political career.

Mr Scindia has been marginalised in the Congress in Madhya Pradesh by his purported rival factional leaders in the party such as Digvijay Singh and chief minister Kamal Nath, a Congress leader said.

According to him, Mr Scindia has found himself in the crossroads of his career following the stunning loss of his family’s traditional Lok Sabha seat of Guna in the last polls.

He was upset over his rival factional leaders allegedly wooing his followers particularly in the Kamal Nath ministry to their camps to cut him down to size in the party.

At least a couple of the seven ministers, considered his loyalists in the Kamal Nath ministry, have switched over to his rival camp recently, much to his chagrin, sources said.

“Mr Scindia is apprehensive of his political future in the Congress in the wake of Central party leadership’s reluctance to rein in his rival leaders in the party in MP. Hence, I will not be surprised if he mulled to explore other options to revive his political fortune,” a senior Congress leader confided to this newspaper, unwilling to be quoted.

According to him, he has two options left with him if he decided to quit Congress — either to float his party, like his late father Madhav Rao Scindia did, or join the BJP. The grapevine has it that he might bargain with the BJP to split the Congress Legislature Party in order to pull down the Kamal Nath government for a ministerial berth in the Union government.

“All I can say at the juncture that both the options are wild speculations. But, I am not ruling out a major political development in the state in the coming days,” a senior Congress leader in the know of things in Scindia camp indicated to this newspaper.

However, one of the options — floating a party — appears most unfeasible for him at the juncture.