Rahul Anand was picked up from his residence on Saturday night by CBI team, which had spent close to 12 hrs conducting raids on shelter. 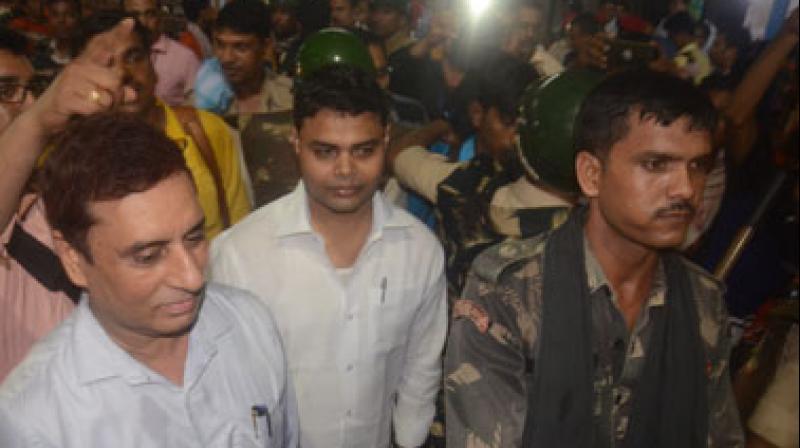 Rahul Anand (Centre) returned to his residence early on Sunday morning after several hours of questioning by CBI.(Photo: PTI)

Rahul Anand was picked up from his residence on Saturday night by a CBI team, which had spent close to 12 hours conducting raids on the premises of the now-sealed shelter home and the office of a Hindi daily "Pratah Kamal", owned by Brajesh Thakur's family.

He returned to his residence early on Sunday morning after several hours of questioning by CBI.

The CBI is understood to have been looking at various angles, which include sexual abuse of inmates at the Muzaffarpur shelter home, misuse of public funds allocated to an NGO controlled by Brajesh Thakur, and the alleged links of high-profile people with the prime accused.

Brajesh Thakur's NGO was blacklisted in June, soon after a police complaint was filed by police in the case, subsequent to the exposure of details of sexual abuse of inmates in a social audit report.

The audit report by Tata Institute of Social Sciences gave explicit information on the physical exploitation of minor girls at the shelter home.

In a raid conducted at the Muzaffarpur jail on Saturday, which led to the recovery of several banned items, a piece of paper was seized from Thakur with names and mobile numbers of 40 people.

District Magistrate Mohd Sohail said the paper has been handed over to the Mithanpura police station for investigation and a complaint may be lodged in the matter if it was found that Thakur had been making calls from the jail to any of the numbers mentioned in it.

In a related development, a police complaint has been filed at the Mahila Thana in Muzaffarpur town of the district against Shibha Kumari, the wife of a district child protection officer Ravi Roshan, who is among the 10 persons arrested so far in connection with the scandal.

Shibha Kumari recently caused a flutter by alleging that the husband of former social welfare department minister Manju Verma was a regular visitor at the shelter home and that Roshan was being made a scapegoat to shield some "big fish".

Manju Verma had resigned from her post last week while maintaining that her husband was innocent. She threatened to file a defamation suit against Kumari.

The FIR was registered following a direction from the Supreme Court, which taking suo motu cognizance of the case, expressed displeasure that Kumari, in her outbursts in public and on social media, made public the identity of some of the victims in violation of law.