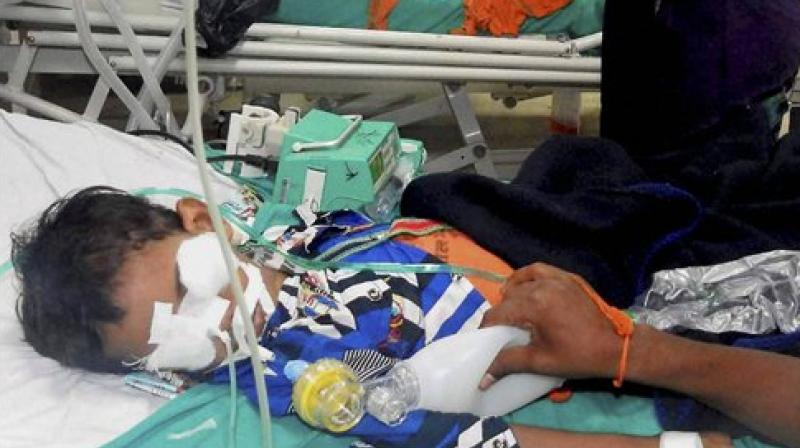 Gorakhpur/Lucknow: Raids are being conducted at a company which supplied oxygen cylinders to Gorakhpur's Baba Raghav Das Medical College, where 63 children have died over the last six days.

According to NDTV, raids are being conducted at company supplying oxygen to the Baba Raghav Das Medical College in Uttar Pradesh’s Gorakhpur.

Talking to media in Gorakhpur, senior Congress leader Ghulam Nabi Azad said, "We are deeply saddened by the incident. The incident has left the whole nation in grief. What happened here was due to lapse on the Uttar Pradesh government. Adityanath and Health Minister Siddharth Nath Singh should immediately resign from their post."

"Gorakhpur is the constituency of CM Adityanath. Considering, he is both the MP and CM, he must take moral responsibility and should resign. Same goes for Health Minister. Doctors are responsible for the incident," he said.

The Congress leader further informed that the suppliers who provide liquid oxygen were not given payment on time.

"Suppliers were not given money on time. Around 70 lakhs were due for payment," he added.

Azad further said Congress party had spent crores rupees to provide medical facilities in the hospital during the time of its ruling.

The shortage of oxygen allegedly led to encephalitis, which is a sudden onset inflammation of the brain, following which the children died.

On Friday, it was reported that as many as 30 children lost their lives due to encephalitis in a span of 48 hours at the hospital.

Gorakhpur DM Rajeev Rautela said that the cause of the deaths at the BRD Hospital was the disruption in the supply of liquid oxygen and further appealed to the suppliers to not cut the supply henceforth.

Following this report, the Uttar Pradesh Government jumped in defence of the medical college, while also assuring that the District Magistrate has ordered a magisterial inquiry into the incident and the report will be out in 24 hours.

Meanwhile, according to data procured from the BRD hospital, in past five days - from August 7 to August 11, a total of 60 deaths have occurred in the hospital.