India   All India  12 Aug 2017  Nitish’s message to Sharad Yadav: My way or highway
India, All India

Nitish’s message to Sharad Yadav: My way or highway 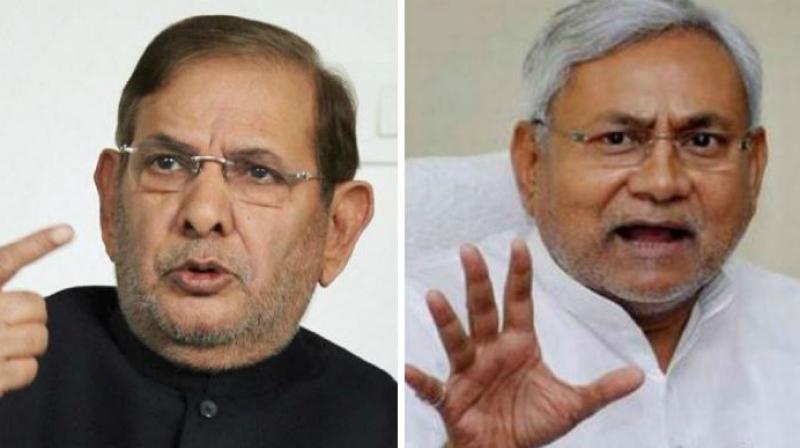 New Delhi: Bihar chief minister and JD(U) chief Nitish Kumar on Friday met Prime Minister Narendra Modi and BJP president Amit Shah and sent a message to rebel leader Sharad Yadav that he was “free to take his decision”. Mr Yadav is miffed with Mr Kumar for joining hands with the BJP, that he claimed was a “betrayal of the mandate” given in the last Assembly elections in the state.

This was Mr Kumar’s first visit to the nation’s capital after the JD(U) quit the “Mahagatbandhan” in Bihar, ending its ties with the Lalu Prasad Yadav-led RJD and the Congress, and joining hands with former ally BJP to run the state government. Mr Kumar also met JD(U) MPs, who apparently urged action against former party president and senior leader Sharad Yadav and three other leaders for going against the party line. Later in the day, the JD(U) suspended its Rajya Sabha MP and another rebel, Ali Anwar Ansari, from its parliamentary party for attending the Opposition parties’ meeting here Friday.

Speculation is rife that at least two JD(U) leaders could join the Narendra Modi government in the next reshuffle and expansion, which is likely to take place this month. The JD(U)’s national executive is meeting in Patna on August 19, where its leadership is expected to announce the decision to formally join the BJP-led NDA.

After his meeting with the Prime Minister at Parliament House, Mr Kumar, replying to questions by reporters on Mr Yadav, said: “He (Yadav) is free to take his decision. As far as the party is concerned, it has already taken its decision. The decision was not mine alone and it was taken with the consent of the party. If he has a different opinion, he is free to do so.”

Miffed over the JD(U) joining hands with the BJP, Mr Yadav is now touring Bihar for a “direct dialogue” with the people and had dubbed the party’s decision to form a new government with the BJP as a “betrayal of the people’s mandate”. He had also claimed that the “real JD(U)” was with him and the one with Mr Kumar was the “sarkari” JD(U).

Mr Kumar described his meeting with the Prime Minister as a courtesy call and said he would visit Delhi again this month end to discuss Bihar’s development issues with the PM. The JD(U) described Mr Kumar’s meeting with BJP president Amit Shah as a “courtesy call” to wish him on his entry to the Rajya Sabha.

Asked if the party would also join the Modi Cabinet, a JD(U) leader said such a decision will be “natural”. He said: “When we are together in government in Bihar, it is only natural that our party joins the Union government.” He added, though, that such a decision will be taken by Mr Kumar and the party was yet to discuss it. The JD(U) has 12 members in Parliament — two in the Lok Sabha and 10 in the Rajya Sabha.