UP govt suspends Gorakhpur hospital chief after death of 63 children

The health minister said that high-level probe will take place and action will be taken as soon as a report on the case is received. 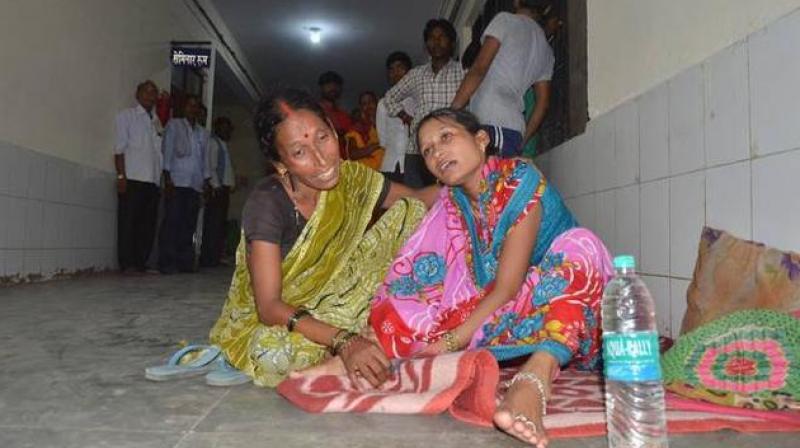 As many as 63 children have died since the past six days as the oxygen supply to the company was allegedly cut by the supplier- Pushpa Private Limited. (Photo: PTI)

Gorakhpur: The Yogi Adityanath-led Uttar Pradesh government on Saturday suspended the principal of the Baba Raghav Das (BRD) Medical College in Gorakhpur, following the death of 63 children, including newborns, due to alleged disruption in the supply of liquid oxygen.

"High level probe to take place, headed by Principal Secretary. Will wait for report, action will be taken. Till then suspending principal," Tandon added.

Meanwhile, Prime Minister Narendra Modi is monitoring situation in the Gorakhpur hospital and is in constant touch with the Central and state government officials.

As many as 63 children have died since the past six days as the oxygen supply to the company was allegedly cut by the supplier -- Pushpa Private Limited.

The cases led to outrage in the country.

Meanwhile, Samajwadi Party (SP) and Bahujan Samaj Party (BSP) termed the death of infants as an outcome of the state government's "gross criminal negligence" and demanded a high-level inquiry into the incident.

Both the opposition parties in the state have decided to send teams to Gorakhpur.

"As many as 60 children have died in a government hospital in Gorakhpur in the last six-seven days. This is an example of gross criminal negligence of the BJP government," BSP chief Mayawati said in a release.

Blaming the Yogi Adityanath government for the tragedy, SP president Akhilesh Yadav claimed that a shortage of oxygen supply in the hospital led to it.

"The company supplying oxygen had informed the principal (of Baba Raghav Das Medical College Hospital) that it would stop the supply if payment was not made and the government must be aware that the deaths have been caused due to a shortage of oxygen," he said.

Stating that the exact toll was not available with the opposition, Yadav said, "We have received information that as the children were dying, their families were being taken out of the hospital in a hush hush manner."

Demanding a high-level inquiry into the incident, Mayawati said all possible help should be extended to the bereaved families.

"As it is not in the nature of the BJP to accept its follies, the matter of dismissing the departmental ministers for this negligence should be left on the wisdom of the chief minister," she added.

The BSP supremo further alleged that the issues of peoples' welfare were of no importance "for the governments of the BJP".

"Issues like tiranga (tricolour), vande mataram, madarsa, anti-romeo squads - which divert the attention of the people - are of more importance to them," she said.

Mayawati added that as the incident took place at a time when the chief minister was on a visit to Gorakhpur and "taking time off his political activities and puja-paath, was doing government work", it raised "a hundred questions on the capacity and working of the BJP government".

Meanwhile, Masood Ahmed, the state unit president of the Rashtriya Lok Dal, said it was a "matter of grave concern" that the district administration and the hospital were "trying to hide their shortcomings" and demanded the resignation of state health minister Siddharth Nath Singh.

"The health minister should resign on moral grounds. It seems he had been busy working as a spokesman of the government and does not have the ability to work as the health minister," he alleged.