Kashmir and parts of Chenab valley of Jammu were shut to protest against abrogation of Article 35A and Article 370 of the Constitution. 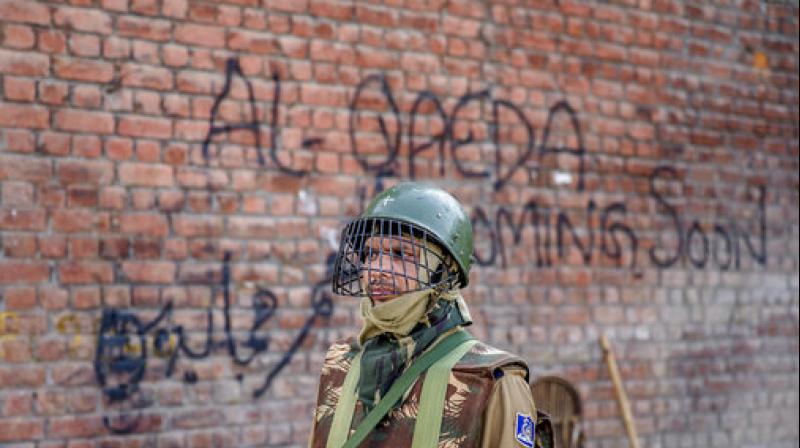 Kashmir and parts of Chenab valley of Jammu region were shut on Saturday to protest against alleged 'devious attempts' being made at the behest of Sangh Parivar to abrogate Article 35A and Article 370 of the Constitution. (Photo: AP)

Srinagar: Kashmir and parts of Chenab valley of Jammu region were shut on Saturday to protest against alleged “devious attempts” being made at the behest of Sangh Parivar to abrogate Article 35A and Article 370 of the Constitution.

Chief Minister, Mehbooba Mufti, who was camping in New Delhi to garner support for continuing of constitutional privileges being enjoyed by Jammu and Kashmir had on Friday claimed that Prime Minister Narendra Modi has assured her that there would be no fiddling with the special status of the State. She also met Home Minister, Rajnath Singh to discussed the issue.

After her meeting with the Prime Minister, Mehbooba had said, “Discussions on 35A have a negative impact on Jammu and Kashmir, it should not happen. The basis of our agenda of alliance is that status quo of Article 370 has to be maintained. None of us can go against that.”

She said Jammu and Kashmir chose to be part of India in 1947 in spite of being a Muslim majority state, indicating that New Delhi must accommodate the demands of the people to retain the special status.

“The idea of India has to accommodate the idea of Jammu and Kashmir,” Mehbooba said.

The Chief Minister added, “Spoke to PM. The situation is normalising but people think our identity can be in danger. So the message that J&K is the crown of India should be reiterated.”

However, her predecessor and opposition National Conference (NC) working president Omar Abdullah while reacting to Mehbooba's assertions said she cannot be believed what she said after her meeting with the Prime Minister.

Abdullah tweeted, “Excuse us if we no longer believe what @MehboobaMufti says after she comes out from these meetings. Can @PMOIndia explain ‘assurances’ pls?” (sic)

On Saturday, the NC categorically stated that it does not believe in Mehbooba's public utterances given her track record. It accused her of being ‘hand-in-glove’ with the BJP and other affiliates of the RSS in “concerted efforts” aimed at striking down Article 35A as well as Article 370 which guarantees a special status to the State within the Indian Union.

NC general secretary and former minister, Ali Muhammad Sagar and the party’s provincial president Nasir Aslam Wani in a joint statement said, “Post Mufti’s meeting with the Prime Minister, senior BJP functionaries have made it abundantly clear that it will continue to actively seek ways and means to strike down Article 35A and there had been no change in their stand on the issue. This has yet again exposed Mehbooba Mufti and her party and their inexhaustible reservoir of lies.”

BJP’s spokesman Virendra Gupta had on Friday said, “Time has come to bid a farewell to Article 370 and Article 35A as these have created separatist psyche in Jammu and Kashmir.”

This was in contrast to a statement from the BJP State unit president Sat Sharma made earlier during the week that the “coalition compulsion” are stopping it from speaking on abrogation of Article 35A and Article 370 now.

“The coalition government with the PDP is run as per ‘Agenda of the Alliance’. It is because of coalition compulsions that the BJP is not speaking about abrogation of special status or Article 35A,” Sharma had said on Tuesday.

On Saturday, shops and other businesses and educational institutions remained closed and public transport services were off the roads in Kashmir Valley and parts of Kishtwar and Doda districts of Jammu.

The Kashmir University and Jammu and Kashmir Board of School Education deferred the examinations which were scheduled to be held on Saturday.

The train services in the Valley were suspended too. There was a heavy presence of police, the CRPF and other central paramilitary forces on the streets Srinagar and other cities and towns whereas the security around the sensitive installations and the camps of security forces had been strengthened further. The entire separatist leadership was earlier placed under house arrest.

The call for the one-day strike was issued by an alliance of key separatist leaders-Syed Ali Shah Geelani, Mirwaiz Umar Farooq and Muhammad Yasin Malik- against the ‘Sangh Parivar-backed devious attempts’ to fiddle with the special status of Jammu and Kashmir.

“These attempts are aimed at changing the demography of the State and dilute its Muslim-majority character,” it alleged.

Various other like-minded political, social and religious organisations and groups besides the lawyers’ associations had endorsed the call.

However, a petition seeking removal of Article 35A is currently pending before a three-judge bench of the Supreme Court.

An NGO, ‘We the Citizens', believed to be an RSS think-tank, challenged 35A in the SC in 2014 on grounds that it was not added to the Constitution through amendment under Article 368 and that it was never presented before Parliament, and came into effect immediately. In another case filed in the SC in July, two Kashmiri women argued that the State's laws, flowing from Article 35A, had disenfranchised their children.

On Tuesday, the SC sought the response of the Centre on yet another plea challenging the validity of Article 370. The petition challenged the April 11 order of the Delhi High Court rejecting a plea saying nothing survives in it as the Apex Court has already dismissed a similar prayer on the issue.