According to data, 82 percent of patients in Dharavi have recovered, bringing down the number of active cases to 166 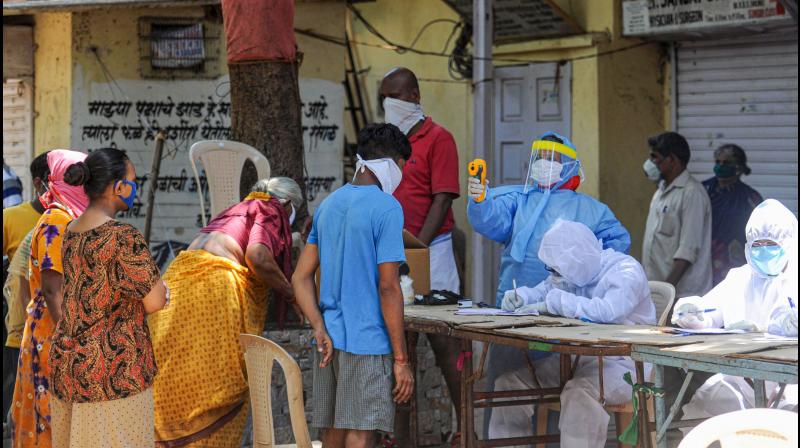 Medics conduct COVID-19 screening of residents at a camp, during the ongoing nationwide lockdown to curb the spread of coronavirus, at Dharavi in Mumbai. (PTI Photo)

Mumbai: Dharavi, one of the largest slums in the world, has added a feather in its cap for its efforts to curb the spread of coronavirus. The World Health Organisation (WHO) has praised the measures taken to control the Covid-19 pandemic in these slums.

According to data, 82 percent of patients in Dharavi have recovered, bringing down the number of active cases to 166. The first Covid-19 patient in Dharavi was found on April 1, nearly three weeks after Mumbai recorded its maiden positive case on March 11. Around 1,815 patients have recovered and been discharged from Covid-19 facilities.

As per the civic body, while in April the doubling rate of cases was 18 days, it is now 430 days. At least six lakh local residents were screened, 14,000 persons were tested and 13,000 were placed in institutional quarantine with free medical facilities and community kitchen service.

Kiran Dighavkar, Assistant Municipal Commissioner of the G North ward, said that the civic body implemented an aggressive system of reaching out to patients instead of waiting for them to come to hospital. Instead healthcare workers went from door to door to look for potential patients. “Proactive screening helped in early detection, timely treatment and recovery,” he said.

Applauding the efforts, WHO Director-General Tedros Adhanom Ghebreyesus said Dharavi has shown that even if the outbreak is very intense, it can still be brought back under control with sustained and dedicated efforts. “A strong focus on community engagement and the basics of testing, tracing, isolating and treating all those that are sick is key to breaking the chains of transmission and suppressing the virus,” he added.

“Dharavi has become a global role model in the containment of coronavirus. It showed that coronavirus can be contained through self-discipline and community efforts,” Maharashtra Chief Minister Uddhav Thackeray said. He praised the BMC, private doctors, NGOs and local residents for the feat.