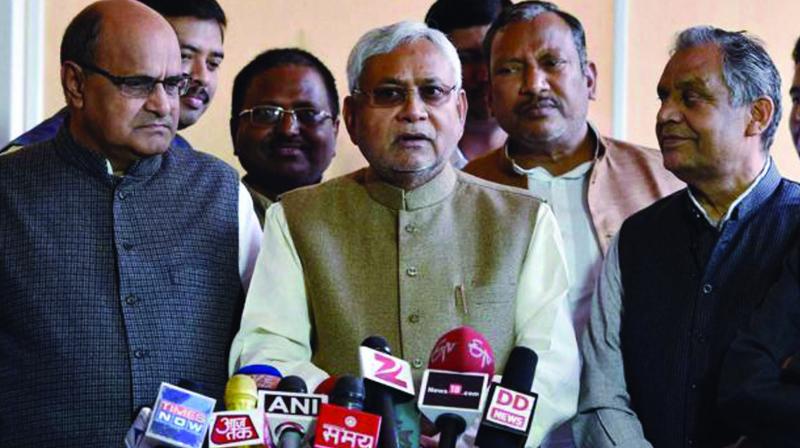 Patna: JD(U) may join hands with like-minded political parties, including YSR Congress and Biju Janata Dal (BJD), to raise the issue of special status for Bihar in Parliament. The JD(U), BJD and YSR Congress have a substantial presence in the Lok Sabha with 16, 12 and 22 members respectively.

Recently senior JD(U) leader K.C. Tyagi categorically said that “the party won’t budge from its demand for the special status”. He said that “there is a vast difference between special status and special package. We will seek support from other political parties and raise the issue”.

Party leaders believe that the state meets the criterion because of its poor infrastructure. According to experts, the special status category will help Bihar get various tax concessions which may attract investments and industries.

The ministry of planning had earlier cited the criterion fixed by the National Development Council (NDC) to reject Bihar’s demand for the special status category.

The experts pointed out that the Central government was jittery in granting special status to the state after the panel headed by Raghuram Rajan had earlier suggested a general method for allocating Central funds based on the need of the state as well as its performance.

According to market observers, the state has not seen any big-ticket investment despite Nitish Kumar’s efforts to woo industrialists. They said that the situation deteriorated after liquor companies were forced to shelve their production and expansion plans due to stringent prohibition law which was imposed in Bihar on April 5, 2016.

The state has been looking for an option to make up for the revenue loss to the tune of Rs 5,000 crore incurred in 2017-18 due to the liquor ban.

Addressing the fifth meeting of the governing council of NITI Aayog in June, Bihar chief minister Nitish Kumar had pointed out that the Raghuram Rajan Committee in its report had identified ten most backward states, including Bihar.

During the meeting, Mr. Kumar said that the committee in its report had mentioned that the Central government may provide assistance in other forms to increase the pace of development of most backward states.

Demands for the special status category to Bihar have been a key issue for Nitish Kumar and his party JD(U). As a matter of fact, between 2009 and 2017, Mr. Kumar had raised the issue several times on various platforms.

Political analysts in Bihar recall that during a rally in 2009, Nitish Kumar despite being with the NDA had created a flutter by announcing that he can go with any party which grants special category status to Bihar.

After forming the government with the BJP in July 2017, he repeatedly raised the issue and urged Prime Minister Narendra Modi to bring the state under the special category zone.

Bihar chief minister Nitish Kumar had made a dramatic turnaround last year and left the Grand Secular alliance which had catapulted him to power in 2015. Among many reasons he had cited for returning to the NDA fold was the need for a special package and special status category for Bihar from the Central government. However, the Opposition feels that he went silent after the Centre repeatedly rejected his demands.

“Bihar cannot progress without special status. If the Centre brings Bihar under the special category zone, it will get maximum benefits to develop industrial infrastructure,” JD(U) leader K.C. Tyagi said.