The police said that the preliminary investigations suggest that the children were fiddling with the explosive when it exploded. 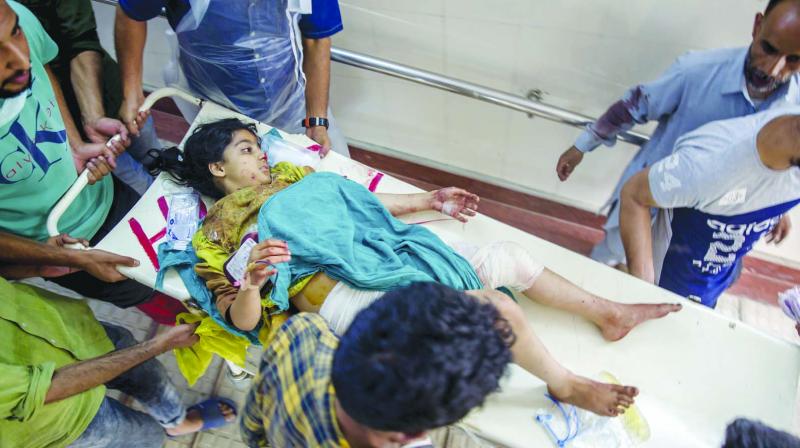 Relatives and paramedics carry a girl, Razia Khursheed, wounded in an explosion for treatment at a hospital in Srinagar on Wednesday. (Photo: AP)

Srinagar: A minor boy was killed and four others, including a girl, were injured in a blast inside a residential compound in southern Shopian district of the Valley on Wednesday.

The police said that the explosion took place in the residential compound of one Khursheed Ahmad Sheikh in Meemandar village of Shopian, resulting in injuries to five children, all aged between six and eight years. One of them, identified as Salik Iqbal Sheikh, was declar-ed brought dead when the injured were taken to the hospital. The condition of the three injured is stated to be critical.

The police said that the preliminary investigations suggest that the children were fiddling with the explosive when it exploded.

The normal life across Kashmir Valley was disrupted on Wednesday due to a shutdown call issued by an alliance of key separatist leaders against the killing of a civilian and injuries to dozens of other in security forces’ actions against protesters and stone-pelting mobs in Shopian’s Kundalan village on Tuesday.

22-year-old you Khalid Gaffar Malik was killed and another wounded when the Army opened fire on a stone-pelting crowd in Trehgam area of Kup-wara on Wednesday even-ing, police sources said.

Shops and other businesses and schools remained closed in the Valley whereas only skeleton transport services plied on select routes in Srinagar and most other parts of the Valley.

Clashes erupted at Kundalan on Tuesday during an encounter in which two Jaish-e-Muhammad (JeM) militants, one of them believed to be a Pakistani national, were killed by the security forces. Two Army personnel, including a JCO, were injured.

The police had said that a local youth, Tamsheel Ahmed Khan, was caught in cross fire during the encounter between militants and the security forces and died in the hospital later.

However, the locals claimed that he was part of a crowd which protested near the site of the encounter and was fired upon by security forces.