Bus was a ‘soft target’ at night; govt says no pilgrim travel after sunset; changes in SOPs; LeT denies hand. 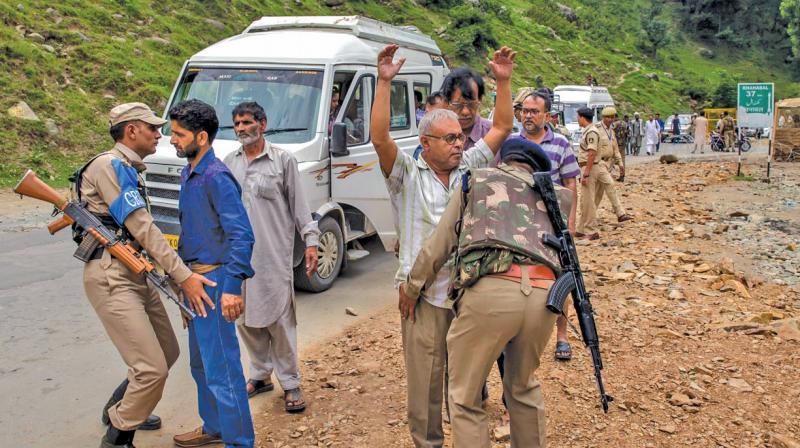 Paramilitary jawans frisk a Kashmiri civilian (left) and a pilgrim (right) as others wait for their turn at a temporary checkpoint near the base camp in Pahalgam. (Photo: AP)

Srinagar/New Delhi: Monday night’s attack on the Amarnath pilgrims was masterminded by top Lashkar-e-Tayyaba commander Abu Ismail, who is known to operate in South Kashmir, the J&K police and the Centre claimed on Tuesday, but the Lashkar denied this. The attack is believed to have been carried out by two groups of militants that targeted the bus twice within a distance of 75 meters, the intelligence and security agencies revealed at a high-level meeting chaired by Union home minister Rajnath Singh in New Delhi on Tuesday, where national security adviser Ajit Doval was also present.

Denying the claim that Lashkar was behind the attack, its spokesman Abdullah Ghaznavi said in a statement issued to a news agency in J&K that the attack was a “highly reprehensible act”. He said: “Islam does not allow violence against any faith. We strongly condemn such acts.” Reacting to the claim earlier by IGP (Kashmir Range) Munir Ahmed Khan about LeT involvement, Ghaznavi said Kashmiris have never targeted any pilgrim. “This barbarity and atrocity is the trademark of the Indian forces,” he alleged.

The meeting chaired by the home minister, sources said, was also told the bus was not part of the security convoy as it had halted to replace a punctured tyre. A report  sent by the state police had also said that since the bus was travelling without proper security cover, it had become a “soft target” for the militants who were apparently closely monitoring the movement of convoys of Amarnath pilgrims. The possibility of some local operatives providing help to the militants has not been ruled out.

Top security sources said the Centre had given a clear directive to the security forces to launch a massive hunt for Abu Ismail and other members of the module involved in Monday’s  terror attack.

“Most of the firing was done at the right side of the bus, where 28 passengers were seated. The seven passengers who died and most of the injured were sitting on that side. Initial reports revealed that the militants came in two groups, comprising three and two, and fired indiscriminately at the bus within a range of 75 meters. The bus driver, however, showed quick presence of mind and courage and kept driving all through the firing, which saved most passengers,” a senior security official said.

IGP (Kashmir range) Munir Ahmed Khan, speaking to reporters, reiterated the police’s earlier statement that the gunmen had initially attacked a police bunker at Botengo, 56 km south of Srinagar, and that the fire was returned, but the exchange didn’t cause any casualties. He said soon after, the terrorists targeted a police naka party at neighbouring Khanabal, the gateway to Anantnag town on the Jammu-Srinagar highway, and again fire was returned. A tourist bus with pilgrims, mainly from Gujarat, on its way to Jammu from Baltal, an Amarnath Yatra base camp, was caught in the crossfire, leading to the deaths of seven persons on board. The other injured are being treated at Srinagar’s 92 Base Army Hospital.

The police in Srinagar said the bus was not part of a Amarnath Yatra convoy. Such convoys are provided tight security right from Lakhanpur in Kathua district of Jammu region to the base camps of Baltal and Pahalgam and back. Also as per standard operating procedure vetted by the Shri Amarnathji Shrine Board (SASB), no vehicle carrying Amarnath pilgrims is to be allowed to move between the base camps and the Jawahar Tunnel beneath the Pir Panjal Range, which connects the state’s Jammu region with the Valley, after nightfall.

The police had before the start of the 40-day yatra said no vehicle carrying pilgrims would be allowed to cross the Jawahar Tunnel after 3.30 pm. “This was done so that yatris reach the Baltal base camp within seven hours from the tunnel, and they don’t have to make a night halt midway,” they said, adding: “This will ensure they don’t travel after nightfall.”

The officials said they were also investigating how the bus with Amarnath pilgrims was moving along the “most vulnerable” stretch of the Srinagar-Jammu highway after sunset. The attack took place at around 8. 15 pm. A fresh batch of devotees, meanwhile, left on Tuesday for the cave shrine under escort by the security forces from Jammu.

The Centre has sent a high-level team comprising ministers of state Hansraj Ahir and Jitendra Singh to Srinagar to monitor the situation. Top intelligence and security officials too have been rushed to the Valley.

The high-level meeting chaired by the home minister, meanwhile, reviewed the security arrangements for the yatra and decided to make some changes in the existing arrangements. For instance, the timing for the road-opening party which leads the pilgrims’ convoy is likely to be extended by an hour from 7 pm as of now. In addition, two more security vehicles will be added to the convoy along with a mobile bunker, and security posts along the route in the sensitive South Kashmir area would also be increased.

It was also decided to make the screening process for the Amarnath Yatra more stringent and the movement of only those convoys registered with the authorities would be allowed. Intelligence agencies had already warned of an increased threat perception, the highest in a decade, to this year’s yatra.

Describing the attack as a “cowardly act of terror”, the home minister condemned the incident, saying it was heartening to see the whole nation stand united against terrorism. “The incident is unfortunate and I am pained at the loss of lives. But I salute the people of Kashmir as all sections of society have condemned the attack. It shows the spirit of Kashmiriyat is very much alive,” Mr Singh added.

In an interesting move, the home minister rebutted an online troll on the social media, saying all Kashmiris are not terrorists and said that it was his job to ensure peace and tranquillity in all parts of the country. This was in response to a tweet which questioned the home minister’s response that the people of Kashmir had strongly condemned the attack. The Centre also announced compensation of `7 lakhs for each of those killed and `1 lakh for the injured.

In Srinagar, chief minister Mehbooba Mufti called an emergency Cabinet meeting to review the situation all across the state, and directed the security forces, including the J&K police, to “act swiftly and arrest the perpetrators so that a stern message went out to anti-social elements that severe and punitive action can be taken against them if they went against the law”. She said the Amarnath pilgrims were “esteemed guests” of Kashmir and that the “perpetrators of crime have dealt a death blow to the ethos and culture of the state”.

The chief minister earlier spoke on the phone with the CMs of Gujarat and Maharashtra to convey her deep sympathies. The pilgrims killed or injured in the attack belonged to these two states.