CM Nitish Kumar had called a meeting of his party legislators and leaders to discuss the CBI raids on RJD chief Lalu Yadav and his family. 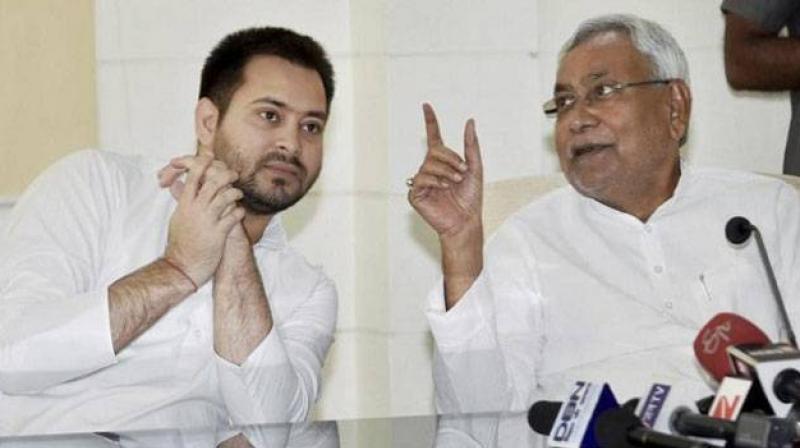 Bihar chief minister Nitish Kumar had called a meeting of his party legislators and leaders to discuss the CBI raids on RJD chief Lalu Yadav and his family. Senior JD(U) leader Ramai Ramai said after the meet: “The party will discuss the issue again after four days, let the RJD decide what is to be done now.”

While other JD(U) leaders refused to comment on the statement by Ramai Ram, they said the Lalu Yadav  family must come out with the whole truth about the allegations levelled against them.

“Chief minister Nitish Kumar has always shown that he has zero tolerance for corruption and the USP of our government has been good governance. We have always acted against those facing corruption charges, but in this particular case we hope that those who are facing corruption charges would come out with the truth,” JD(U) spokesman Niraj Kumar said, in what was said to be an official statement approved by the Bihar CM. Party insiders said Mr Nitish Kumar did not demand Tejashwi Yadav’s resignation as the CBI has not yet filed any chargesheet in the case. The chief minister is said to be upset as the tag of “good governance” has suffered due to the fresh corruption charges against Lalu Yadav and Tejashwi Yadav. Ahead of Tuesday’s meeting, several JD(U) leaders had said there would be no compromise on the issue of corruption and that Mr Nitish Kumar would take a “tough stand” on the issue. Sources said the party has not directly asked Tejashwi Yadav to resign from his post but has decided to give Lalu Yadav more time to think and decide about the fate of his son Tejashwi and the Grand Secular Alliance government.

“We know our limitations and also respect coalition dharma. We will follow it but we hope that they (RJD) will issue a public clarification based on the facts”, JD(U) spokesman Niraj Kumar said.

These were the first official comment by the JD(U) after Lalu Yadav’s premises were raided by the CBI over allegations that he had used his position as railway minister in the UPA-1 government to acquire land in Patna at cheaper rates.

These plots of land were later transferred to the names of his family members, including his sons Tejashwi Yadav and Tej Pratap Yadav. Both brothers are now ministers in the Nitish Kumar Cabinet in Bihar.

RJD leaders gathered at Lalu Yadav’s residence after the JD(U)’s four-day ultimatum said that there was no question of resignation by Tejashwi Yadav over the issue. “There is no pressure on Tejashwi Yadav to resign. He will not resign, there is a conspiracy by the BJP to break the Grand Secular Alliance in Bihar and also to weaken the unity of Opposition parties”, RJD leader Raghuvansh Prasad Singh told this newspaper.