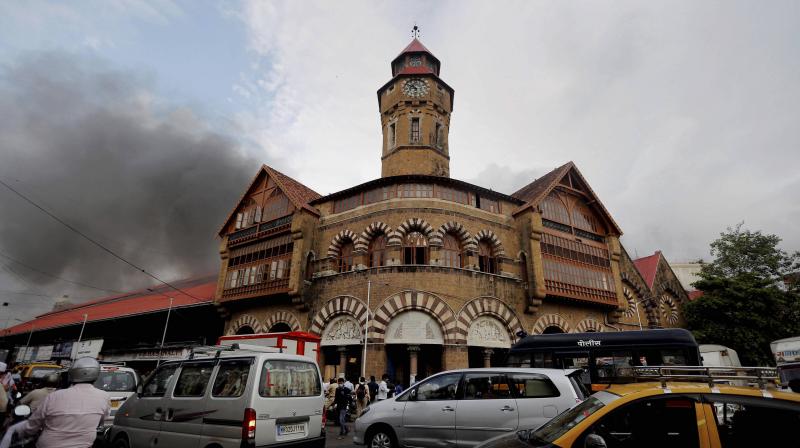 Plumes of smoke rise from a building after a fire broke out in few shops at Crawford Market in Mumbai, Thursday. (PTI)

Mumbai: Several shops located inside the heritage Crawford Market building in South Mumbai were gutted in a massive fire which broke out on Thursday evening, the Fire Brigade said.

While fire officials took almost three hours to douse the flames, nobody was injured, it added.

The fire started in north-end wing of the British-era structure around 6.15 pm and was brought under control around 9 pm, the Fire Brigade said.

A dozen big and small stalls with ground and mezzanine floors were destroyed in the fire, which was put out by five fire-fighting jets of six fire engines.

"Very fast intervention and response by fire brigade has averted a major incident," said a senior officer, adding that it was initially level-1 fire call, which was later escalated to level-2.

Five jumbo tankers, one quick response vehicle and an ambulance were also rushed to the spot.

The shops inside the Market were closed when the blaze erupted.

Mayor Kishori Pednekar rushed to the heritage building and took a stock of the fire fighting operation.

As per civic officials, the Fire Brigade had expressed concern that cardboards stored inside shops were a potential fire hazard. The exact cause of the fire was yet to be ascertained.