SC: It's OK to hold up workers' wages. But how can you not pay doctors? 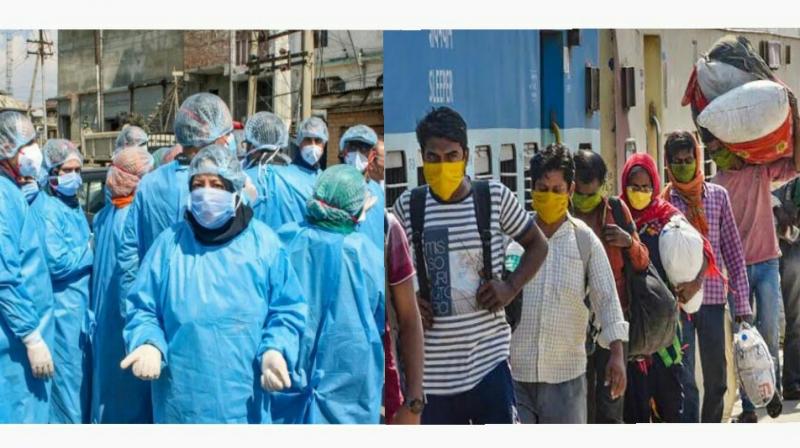 The Supreme Court directed the Centre and the states not to take any action against companies unable to pay full wages. (PTI Photo)

In one it directed the Centre and the states not to take any coercive action till July end against private companies which have not paid full wages to their employees during the coronavirus lockdown.

In another, the Supreme Court took serious note of the non-payment of salary and lack of proper accommodation to doctors engaged in the fight against COVID-19.

The courts should not have to step in on the issue of non-payment of salary to healthcare workers. The government should settle the issue, it said.

The latter remarks came as the top court was hearing a plea by a doctor who alleged that frontline healthcare workers engaged in the fight against COVID-19 are not being paid salaries or their salaries are being cut or delayed.

"In war, you do not make soldiers unhappy. Travel the extra mile and channel some extra money to address grievances. The country cannot afford to have dissatisfied soldiers in this war which is being fought against Corona,” said the bench comprising Justices Ashok Bhushan, S K Kaul and M R Shah.

The bench said that there were reports coming out that in many areas doctors were not being paid. “We saw reports that doctors have gone on strike. In Delhi, some doctors have not been paid for three months. These are concerns that should have been taken care off. It should not require court intervention."

However, the same three-judge bench of Justices Ashok Bhushan, Sanjay Kishan Kaul and M R Shah said industries and employees need each other and they should sit together to arrive at a settlement on the issue of payment of wages.

The bench, which passed an order in the matter, asked state governments to facilitate such settlement process and file its report with the labour commissioners concerned.

It also asked the Centre to file an additional affidavit within four weeks with regard to the legality of Ministry of Home Affairs' March 29 circular which had mandated payment of full wages during the lockdown period.

The bench posted the petitions filed by various companies against the March 29 circular, for further hearing in last week of July.

The apex court asked the Centre and state governments to circulate its order through labour departments to facilitate the settlement process.

The Secretary (Labour & Employment) had also written to chief secretaries of states to advise employers not to terminate employees from their jobs or reduce their wages amid the challenging situation of the pandemic.