The AAP govt's demands include direction to IAS officers to end their 'strike', action against those who have struck work for 'four months'. 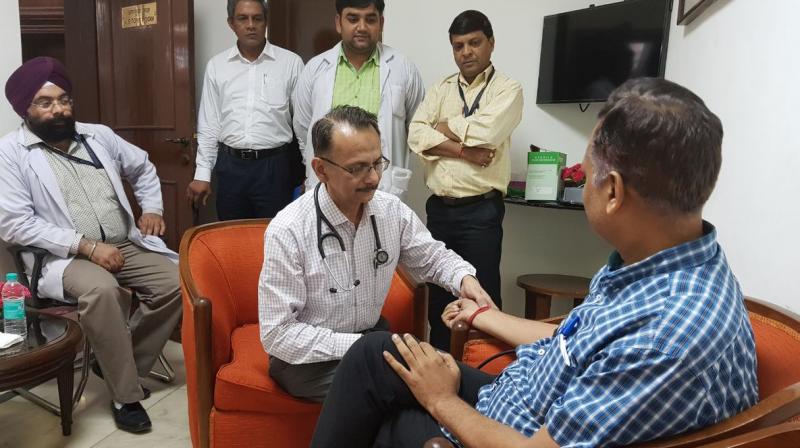 Doctors doing normal Health Check up of SatyendarJain at LG House as he is on Anshan since Tuesday morning. (Photo: Twitter | @ArvindKejriwal )

New Delhi: Delhi Chief Minister Arvind Kejriwal and his cabinet colleagues, who spent the night at the lieutenant governor's office, on Tuesday, dug in their heels with Health Minister Satyendar Jain beginning an indefinite hunger strike to press for their demands.

The AAP government's demands include a direction to IAS officers to end their "strike", action against those who have struck work for "four months". It has also asked the L-G to approve the proposal for doorstep delivery of rations.

Kejriwal, his deputy Manish Sisodia, Development Minister Gopal Rai and Jain met Baijal at 5.30 pm on Monday and have since stayed on. After spending the entire night, Kejriwal released a video on Tuesday and said that the AAP ministers had "no option" but to stage a sit-in at the LG's office as Lt Governor Anil Baijal was not paying heed to the Delhi government's demands "despite several requests".

It was the first time in the history of Delhi that the chief minister and his cabinet colleagues spent the night at the L-G's office to press for their demands, sources said. The move drew criticism from the BJP's local unit who termed the sit-in as a "mockery of democracy". "Making mockery of Democracy, No Work only Drama (sic)," Delhi BJP chief Manoj Tiwari said on Twitter.

However, the AAP maintained that their fight will continue and they will not get "bogged down" till their demands are met. "Modi and LG are not allowing us to work for the betterment. LG is orchestrating the strike by the IAS officers," AAP leader Sanjay Singh said.

Leader of opposition in the Delhi Assembly Vijender Gupta called Kejriwal's sit-in a way to "shirk work". "Delhi's maalik (owner) Kejriwal and company are protesting inside an air-conditioned room. Delicacies are being served to them from outside, while the city's reeling under a water crisis. They are only concerned about politics and not about people's issues," he said on Twitter.

Meanwhile, Kejriwal, tweeted from the LG's office, "Satyender Jain starts indefinite fast". Jain began his fast from the L-G's office at 11 am.

On Monday night, the chief minister, who is a diabetic, had to take insulin during the sit-in and got "specific food" from his home, the sources said. "My dear Delhiites, good morning. Struggle continues," Kejriwal tweeted at 6.27 am from the L-G's office.

A number of AAP MLAs, party's leaders and workers have also camped near the L-G's office and the police have barricaded the area. In the video statement released by him, Kejriwal said that the AAP ministers have staged a sit-in for the people of Delhi so that their work does not get affected.

According to the AAP government, officers have not been attending meetings with the ministers and not picking up their calls due to which the people's work was suffering. Officers have gone on a "partial strike" since the alleged assault on Chief Secretary Anshu Prakash on the intervening night of February 19-20, it said.

In the video message, Kejriwal said that he and his ministers have been requesting the L-G since February 23 to issue directions to the IAS officers to end their "strike", but the Lt Governor was not paying heed to their demands. "Yesterday, we again met him (Baijal) and told him that he will go from here (L-G office) only after getting our demands fulfilled," he said.

The chief minister said, "We are not sitting here for ourselves, but we are sitting here for you (Delhiites) and for schools, water, mohalla clinics so that the people of Delhi could get facilities." Kejriwal alleged that some of the officers told him that the L-G's office was "orchestrating" the "officers' strike" that is why Lt Governor does not want bureaucrats to end their strike. The L-G's office slammed Kejriwal's sit-in, saying it was one more "dharna without reason". A statement, issued by Baijal's office last evening, stated that the L-G was "threatened" to summon officers and issue directions to them to end their "strike" immediately. In the morning, a letter, signed by Kejriwal, Sisodia, Rai and Jain, was sent to Baijal, asking him to take all necessary steps to end the "strike" by the IAS officers, including issuing written orders, that all those officers who do not return to work will be proceeded against and "if necessary, ESMA may be invoked".

Read: L-G paying no heed to demands, no option but to sit on ‘dharna’: Kejriwal

However, the officers association has claimed that no officer is on strike and no work has been affected. "Good Morning @LtGovDelhi Sir! Delhi CM and 3 ministers are still waiting in your waiting room since yesterday evening. We hope today you'll get time from your busy schedule to resolve these three issues . Till then we are waiting...," Sisodia tweeted.

Good Morning @LtGovDelhi Sir! Delhi CM and 3 ministers are still waiting in your waiting room since yesterday evening.
We hope today you'll get time from your busy schedule to resolve these three issues . Till then we are waiting.... pic.twitter.com/q4SAZOZMvC

"Handed him this letter. L-G refuses to take action. L-G is under constitutional duty to act. Left wid no option, we have politely told LG that we will not leave till he acts on all points. We hv come out of his chamber n sitting in his waiting room (sic)," Kejriwal tweeted on Monday evening after he along with his three ministers started their sit-in.

Handed him this letter. LG refuses to take action. LG is under constitutional duty to act. Left wid no option, we have politely told LG that we will not leave till he acts on all points. We hv come out of his chamber n sitting in his waiting room pic.twitter.com/UwsVqqU69g

The AAP government and the bureaucracy have been at loggerheads since the alleged assault on Prakash by AAP MLAs at Kejriwal's residence on the intervening night of February 19-20.