India   All India  12 Jun 2017  Ready for fresh polls only if BJP dissolves assembly in UP: Bihar CM
India, All India

Ready for fresh polls only if BJP dissolves assembly in UP: Bihar CM

Nitish Kumar reacted to UP Dy CM who had dared the former to accept his challenge for early assembly elections in Bihar. 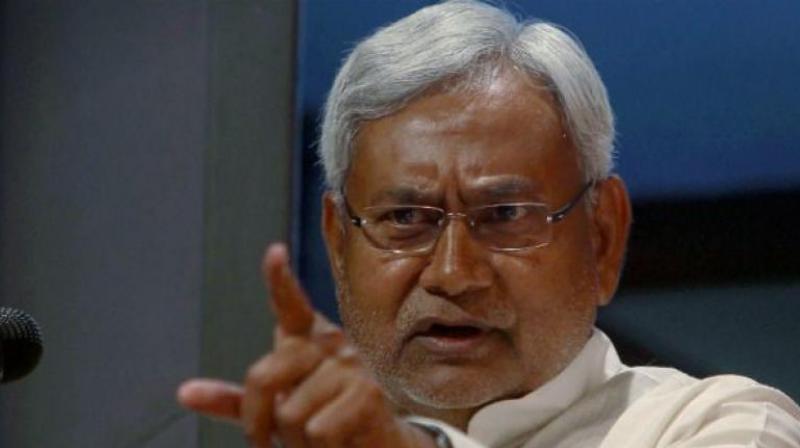 Patna: In a sharp reaction to BJP’s demand for holding an early election in the state, Bihar Chief Minister Nitish Kumar said he was ready to face polls if only BJP agrees to dissolve the assembly in Uttar Pradesh.

The statement was made in reaction to Uttar Pradesh Deputy Chief Minister Keshav Prasad Maurya who had dared Bihar CM to accept his challenge for early assembly elections in Bihar.

Mr Maurya during his speech had said that “your alliance with Lalu Yadav is apavitra (impure) and causing hurdles in the development of the state”. Mr Maurya had further said that “things were different when you were with BJP, leave the alliance now as people are not happy with the performance”.

Mr Maurya who was on a two-day tour of Bihar to highlight the achievements of BJP led NDA government at the centre had raised questions on the performance of Nitish Kumar-led grand secular alliance government in Bihar on Sunday.

“I am ready if election is held simultaneously in Bihar and Uttar Pradesh, If they have the guts then they should come forward”, Bihar Chief Minister Nitish Kumar said on the sidelines of his Samvad programme in Patna on Monday.

Mr Kumar further said that members of NDA should resign and face fresh elections on all Lok Sabha seats in Uttar Pradesh and Bihar ‘if they have guts’.

Party sources said that Nitish Kumar had not expected remark of this sort from a BJP leader who had telephoned him before attending the political function in Patna.

RJD Chief Lalu Yadav who celebrated his 70th birthday on Sunday had said, “grand secular alliance in Bihar is intact and BJP has failed in their efforts to break this alliance".