India   All India  12 May 2022  Soldiers out in Colombo; India denies plans to send its troops
India, All India

Soldiers out in Colombo; India denies plans to send its troops 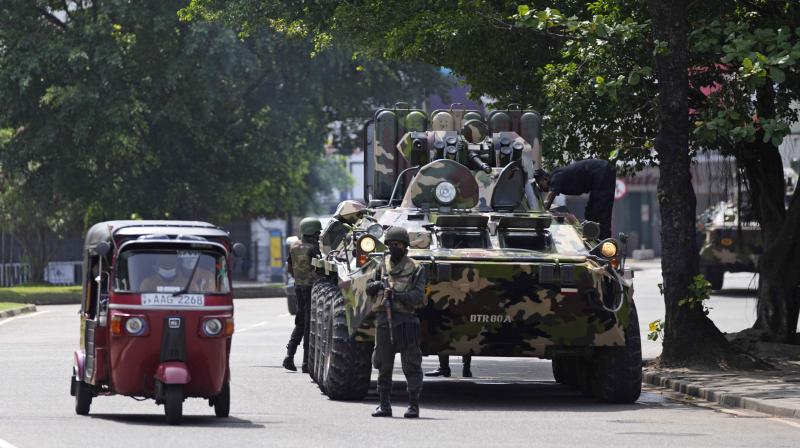 Colombo/New Delhi: As Sri Lankan troops patrolled the streets of Colombo on Wednesday, some of them in armoured vehicles, the Indian government categorically refuted “speculative reports” in a section of the Sri Lankan media that New Delhi will send its armed forces to the island nation that is currently witnessing huge unrest following an economic collapse.

The Indian high commission in Colombo tweeted: “The high commission would like to categorically deny speculative reports in the media and the social media about India sending troops to Sri Lanka. These reports and such views are also not in keeping with the position of the government of India.” The spokesperson of the MEA clearly said yesterday that India is fully supportive of Sri Lanka’s democracy, stability and economic recovery.”

It may be recalled that on Tuesday night, the Indian high commission in Colombo also dismissed “fake and blatantly false reports” in a section of the Sri Lankan media and the social media which had alleged that some Sri Lankan politicians and their families had fled to India to escape the public wrath.

Emphasising the importance of democracy after the violence on Monday that led to the resignation of Prime Minister Mahinda Rajapaksa, India had said Tuesday it fully supported “democracy, stability and economic recovery” in the island nation. New Delhi is watching the developments in its bankrupt and debt-ridden southern neighbour closely as Chinese influence has grown rapidly there in the past few years.

India had sent troops to the island nation as a peacekeeping force at the invitation of the Sri Lankan government way back in 1987 during the Tamil insurgency that gripped it in the mid -1980s. But it proved to be an unhappy experience due to the fighting that erupted between the Indian Army and the LTTE that spearheaded the insurgency. The Indian troops eventually returned in 1990, but the insurgency lasted nearly two decades, with the Sri Lankan Army finally decimating the LTTE in 2009.

Armoured trucks with soldiers riding on top rolled into some areas of Colombo. Defying the curfew, some protesters regrouped opposite the office of President Gotabaya Rajapaksa to continue demonstrations that began over three weeks ago. The police announced over loudspeakers that it was illegal to stay in public places during the curfew.

Videos posted on the social media showed lines of military trucks moving out of the capital, along with soldiers riding on motorbikes, and setting up checkpoints across the nation amid fears that a political vacuum may pave the way for a military takeover.

The defence ministry’s top official, Kamal Gunaratne, denied speculation of a military takeover at a press conference held with the nation’s Army and Navy chiefs. “None of our officers has a desire to take over the government. It has never happened in our country and it is not easy to do it here,” Mr Gunaratne said. President Rajapaksa is a former top Army officer and remains the country’s official defence minister. Mr Gunaratne said the Army will return to its barracks once the security situation normalises.

The Prime Minister’s departure has created an administrative vacuum with no Cabinet, which dissolved automatically with his resignation.

Navy commander Nishantha Ulugetenne said the former PM, Mahinda Rajapaksa, was being protected at a naval base in Trincomalee on the northeastern coast.

Meanwhile, Sri Lanka’s central bank on Wednesday urged the President and Parliament to quickly restore political stability, warning that the economy faces a threat of further collapse within days. “Even for us to make progress on debt restructuring, we need a stable government. A Cabinet, a Parliament, a Prime Minister, a finance minister are all needed,” said the central bank’s governor, Nandalal Weerasinghe. He has threatened to resign if the political leaders cannot restore stability.

“I have informed all political parties that I will resign if there will be no political stability,” said Mr Weerasinghe, who has been in the job only for a month. “When I took over, the crisis was as bad as this, and I hoped it would be resolved quickly so that the central bank could perform the job required,” he said.

Mr Weerasinghe had just begun negotiating with the IMF for a possible bailout package. Since Monday, with the PM’s resignation, there is no functioning finance minister. Mr Weerasinghe said the country’s foreign reserves were not enough to import even the essential goods.