Around midnight on May 11, AMUSU met District Magistrate who said it was not possible to concede to their demands. 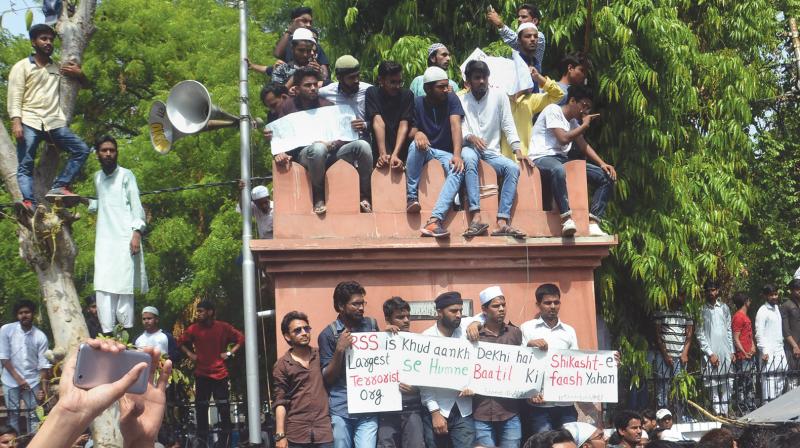 AMUSU decided that a relay hunger strike would begin on the evening of May 12 if authorities do not agree to take action against members of right-wing organisations who barged into the campus and were involved in acts of violence. (Photo: File/PTI)

Aligarh: As the ongoing protest by AMU students entered its 11th day on May 12, the students' union leaders said that the stir would be intensified and a relay hunger strike would be started this evening if their demands were not met.

AMUSU president Mashkoor Usmani told PTI that a general body meeting of the students' union was held on May 11. In the meeting, it was decided that a relay hunger strike would begin on the evening of May 12 if authorities do not agree to take action against members of right-wing organizations who barged into the campus and were involved in acts of violence, Usmani said.

They were also demanding action against the police officers responsible for a lathi-charge on students on the same day. A number of students were injured in the lathi-charge, he said.

Around midnight on May 11, AMU Students' Union met District Magistrate Chandra Bhushan Singh to press for their demands and to hammer out a solution before the evening of May 12.

"We are hopeful after last night's talks that something concrete would come out by this evening," Usmani said. He said the students would cooperate with the administration in ensuring that the annual exams, which began on May 12, were not affected by the ongoing protest.

However, when contacted, the district magistrate said it was not possible to concede to their demands even before they have called off their protest.

Singh also dismissed allegations that the clash which took place on Wednesday was a part of a conspiracy to attack former vice president Hamid Ansari. He said that had Ansari, who was present then in the campus, felt that he was a target of miscreants, he would certainly have filed a complaint with the police.

"I have told the leaders of the AMU Students Union that they should not make such baseless allegations," he said.

Activists of Hindutva organisations on the evening of May 11 held a protest at the Ramlila Grounds, demanding that the portrait of Mohammad Jinnah be immediately removed from the university premises and a probe be conducted into the alleged anti-national activities there.

According to media reports, the state president of the Vishwa Hindu Personal Board, Dharmendra Singh Pawar, on May 11 said in Gajraula town that he would offer Rs 1 lakh to anyone who would remove Jinnah's portrait.