The social studies reference book is used by private English-medium schools affiliated to the RBSE. 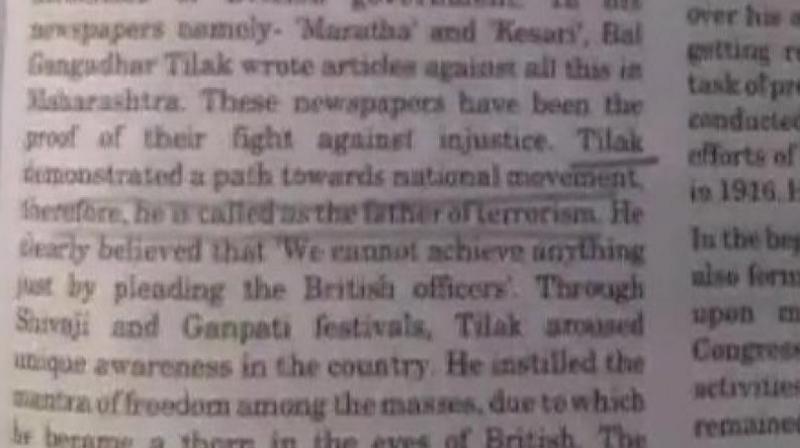 A reference book for social studies subject for class 8 has mentioned Bal Gangadhar Tilak -- one of the top leaders of Indian freedom struggle -- a terrorist. (Photo: ANI/Twitter)

Jaipur: Known for making faux pas in school text books, a reference book for social studies subject for class 8 has mentioned Bal Gangadhar Tilak -- one of the top leaders of Indian freedom struggle -- a terrorist.

Popularly known as “Lokamanya”, Tilak was one of the first and strongest advocate of “Swarajya” who famously said “Swarajya mera janmasiddh Adhikar hai aur mai isko lekar rahunga” (Self rule is my birthright and I shall have it). Ironically, the man who is considered father of the Indian national movement is referred as the ‘father of terrorism’ in the book used by private English-medium schools affiliated to the Rajasthan Board of Secondary Education (RBSE).

On page 267 in chapter 22 under the heading, Incidents of National Movement during Eighteenth and Nineteenth Century, the book says, “Tilak demonstrated a path towards national movement, therefore, he is called as the father of terrorism.”

“He clearly believed that “we cannot achieve anything just by pleading the British officers”. Through Shivaji and Ganpati festivals, Tilak aroused unique awareness in the country. He instilled the mantra of freedom among the masses, due to which he became a thorn in the eyes of British,” the book reads.

Bidisha Bhargava of an English medium girls school affiliated to Rajasthan Board of Secondary Education said that books issued by Rajasthan board are in Hindi medium and there is no English medium book available, she has no option but to use the reference book.

Textbooks in Rajasthan have been mired in controversies in the past. There were gaffes like Gautam Buddha’s picture in a chapter on Bhagwan Mahaveer and insensitive reference to sufi saint Hazrat Nizamuddin Aulia followed by revision of text books that included sidelining first Prime Minister Jawahar Lal Nehru and removing popular poem ‘Khoob Ladi Mardani wo toh Jhansi Wali Rani Thi’ by Subhadra Kumari Chouhan to give more space to Hindutva ideologues Savarkar and highlighting Modi government’s policies, slogans and achievements.