The clashes got a communal colour when an illegal water connection at a place of worship in Moti Karanja area was removed. 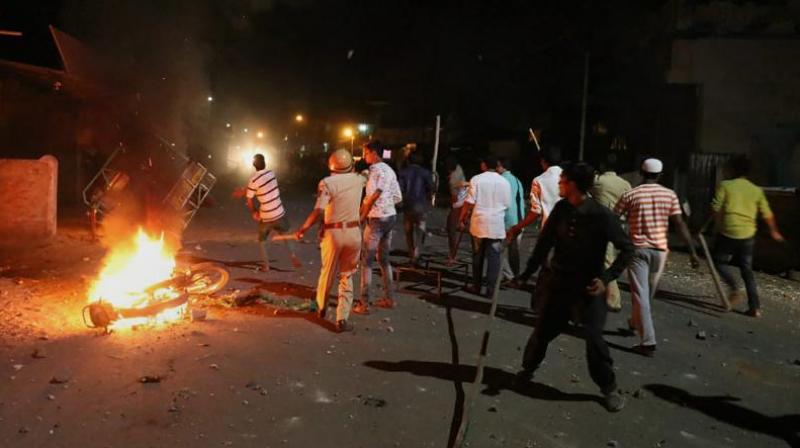 Rioters hurl stones and sticks during a communal riot that escalated due to clamping illegal water connection in a religious place in Moti Karanja area of Aurangabad on Friday night. (Photo: PTI)

Aurangabad: Two people died and around fifty others, including a dozen policemen, were injured as clashes broke out between two communities in Aurangabad city in Central Maharashtra on Friday night, police said.

The situation was under control since Saturday afternoon, but the district administration has clamped prohibitory orders under section 144 of the Code of Criminal Procedure banning assembly of people and suspended Internet services, said a senior police official.

One of the deceased was a 17-year-old youth who allegedly died in police firing, while the other was a 65-year-old man who was trapped in his house when an adjoining shop was set on fire by rioters, the official said.

The rioting started in Moti Karanja area around 10 last night and spread to Gandhi Nagar, Raja Bazaar, Shah Ganj and Sarafa areas, forcing police to fire in the air and lob teargas shells, the official added.

Among those injured were seven women and a dozen policemen, including an assistant commissioner of police. Rioters set fire to around 100 shops and 80 vehicles, the official said, adding that 37 persons have been arrested for rioting and arson since last night.

Leader of Opposition in the Maharashtra Legislative Council Dhananjay Munde alleged that the violence reflected a failure of the state intelligence machinery, and demanded a judicial probe into the incident.

Appealing for peace, the NCP leader asked the police to take local people in confidence while handling the tense situation.