The wedding was solemnized at the sprawling Bihar Veterinary College ground in the presence of several party leaders and dignitaries. 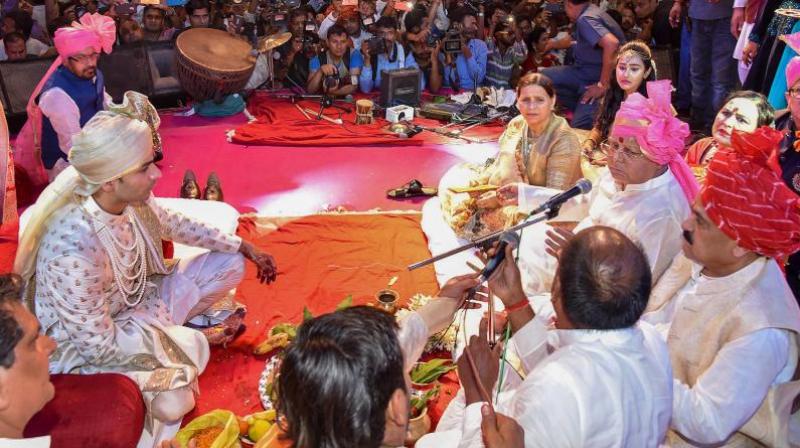 Patna: Lavish arrangements, unique wedding procession, and 200 food stalls were set up for former Bihar Minister Tej Pratap Yadav who tied the knot on Saturday with his fiancé Aishwarya Rai.

The wedding of Lalu Yadav’s son Tej Pratap Yadav was solemnized at the sprawling Bihar Veterinary College ground in Patna on Saturday in the presence of several opposition party leaders and dignitaries.

Aishwarya Rai is the daughter of a former minister and six times RJD MLA Chandrika Rai.

Ahead of the main wedding event, a poster depicting Tej Pratap Yadav and Aishwarya Rai as Lord Shiva and Parvati had raised eyebrows.

“Some overexcited supporter might have put up the picture. The party has no clue who did it,” a RJD source said.

Speaking about the wedding arrangements and the huge turnout of guests at the main wedding venue, RJD spokesperson Bhai Birendra claimed that, “All of us are happy today because Tej Pratap Yadav got married in the presence of our leader Lalu Yadav. We don’t know the exact number but by seeing the crowd we can say that a large number of supporters also attended the wedding ceremony.”

Congress President Rahul Gandhi and his sister Priyanka Gandhi who were also scheduled to attend the event had not reached the wedding venue till late evening.

RJD leaders further explained that supporters in large numbers poured in from all across Bihar, Jharkhand, Uttar Pradesh and West Bengal.

RJD Chief Lalu Yadav who was sent to jail in December following conviction in the fodder scam case had returned to Patna on Thursday after being granted provisional six-week bail on medical grounds.

RJD sources said, “Lalu Yadav looked relaxed after the bail was granted to him. He also personally received former UP CM Akhilesh Yadav who arrived at his residence to attend the wedding of his son.”