India   All India  12 Apr 2019  This is what happened when US tourist brought 14 pets in the hotel
India, All India

The manager of Silver Spring Hotel said, 'She arrived on April 9 with 6 cats, 7 dogs and a goat.' 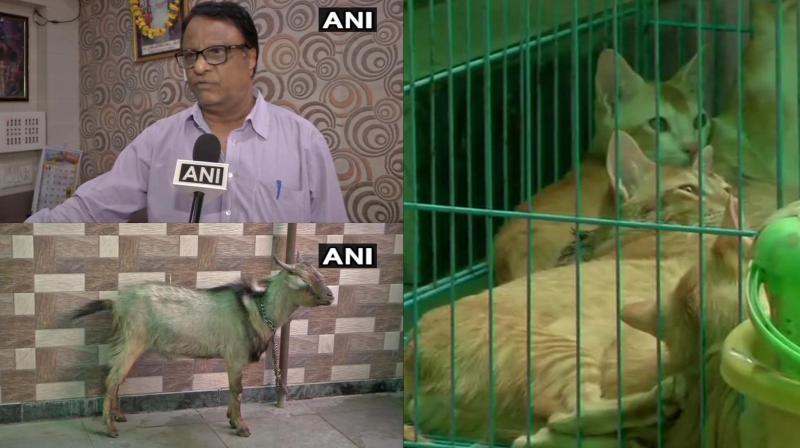 Manager said that they asked her to leave as they don't allow pets. (Photo: ANI | Twitter)

Ahmedabad: An American woman is facing difficulty to find accommodation for her 14 pets and is currently staying in Silver Springs hotel here with six puppies, six cats, one female dog, and a goat.

Her pets have become a problem for hotel manager Pradeep Agarwal, who has complained of nuisance and foul smell. She even had a tiff with the hotel manager when he asked her to leave the place.

Talking to ANI, Pradeep Agarwal, the hotel manager said, "She came around 3 AM on April 9 and the security guard allotted her a room. Next morning I got to know she has pets and when I asked her to vacate the room, she denied by saying that she has booked and paid room for till April 11."

"Before I tried calling the police, the woman called someone may be from the US Embassy or from police. Police Inspector of Kagdapith, reached our hotel to look into the matter. Generally, the inspector does not come on one call, so she must have called at Embassy", the manager claimed.

He added, "Police tried to help her out but I do not think any arrangement has been done for her yet."

Refusing to reveal her identity, the woman said, "I rescued this female dog in January 2015 in Uttarkashi and this goat in March 2015. I am trying to find a loving and caring family for my pets. Someone assured me to help but he is late and the hotel management wants me to vacate this place".

The woman added, " I can not leave the pets here. I am trying to vacate this place till then I am waiting for help."

"I am arranging for something to solve the issue," she added.