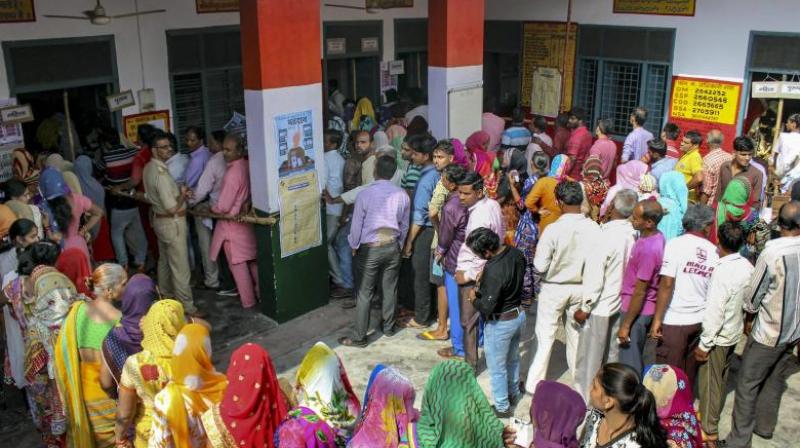 Voters stand in a queue to cast their votes at a polling station in Meerut on Thursday. (PTI)

Muzaffarnagar: Despite sounding confident, the BJP is keeping its fingers crossed in the communally sensitive sugar belt in Western Uttar Pradesh as voters in eight seats, with a considerable population of Jats and Muslims, cast their ballot on Thursday in the first phase of Lok Sabha elections.

Brisk polling took place in the agrarian belt, including Muzaffarnagar, Baghpat, Bijnor, Saharanpur, Kairana and Meerut, as voters virtually leapt from their beds early in the morning and headed for polling booths. There were queues outside booths in many constituencies, with visible excitement in villages. There were some reports of names missing from voters' list and EVM "malfunctioning" in Muslim-dominated areas.

“We did not face any problem at the poll booth,” said Roshni, a first-time voter from a college in Muzzaffarnagar city, who braved the scorching sun to exercise her franchise.

The mighty combination of SP-BSP-RLD is looking to seek a sweet revenge in the region for the 2014 washout by the BJP that has been alarmed by the RSS’ internal report saying that it is likely to lose six of the eight seats it won in the last election. By the final hour of voting, the new alliance appeared confident of accomplishing its mission of puncturing the BJP’s Vijay Rath.

Distressed cane farmers in the region are said to be unhappy with the BJP government for not getting them their sugar mill dues amounting to Rs 22,000 crore that have been pending for over an year. The voting pattern in this belt is crucial as it sets the tone for the entire state and the Hindi belt. The Narendra Modi wave in 2014 had started from this region itself following major Jat-Muslim riots in Muzzafarnagar in 2013.

In Muzaffarnagar, farmer leader Chaudhary Ajit Singh of the Rashtriya Lok Dal (RLD), the common candidate of the SP-BSP-RLD alliance, is pitted against former Union minister and sitting BJP MP Sanjeev Balyan. Mr Balyan was accused by the rival camp of playing a role in the 2013 communal violence in Muzzaffarnagar that laid the foundation for polarisation of votes that resulted in the saffron party winning all eight seats in the belt in 2014 polls.

After meetings with party workers on polling day, Chaudhary Ajit Singh exuded confidence of a win. “Arithmatically, the SP-BSP-RLD combination is unbeatable,” Ajit Singh told The Asian Age, dismissing fears that supporters of SP and BSP were confused as they were looking for symbols of their respective parties' instead of RLD's “handpump” election symbol on EVMs.

The EC’s security observer and the administration remained on tenterhooks in the entire sugar belt on the poll-eve and throughout the voting day after a minor flare up between two rival camps of Jats in Bijnor constituency on Wednesday night.

Sources said that there were reports of poll-eve freebies, including biryani, doing the rounds in the region which is known to explode over minor communal triggers. Two additional companies of Central forces were deployed in the region for polling security.

In Muzaffarnagar, there are approximately 16.5 lakh voters out of which five lakh are Muslims and the rest are Hindus, a majority of them Jats and Jatavs.