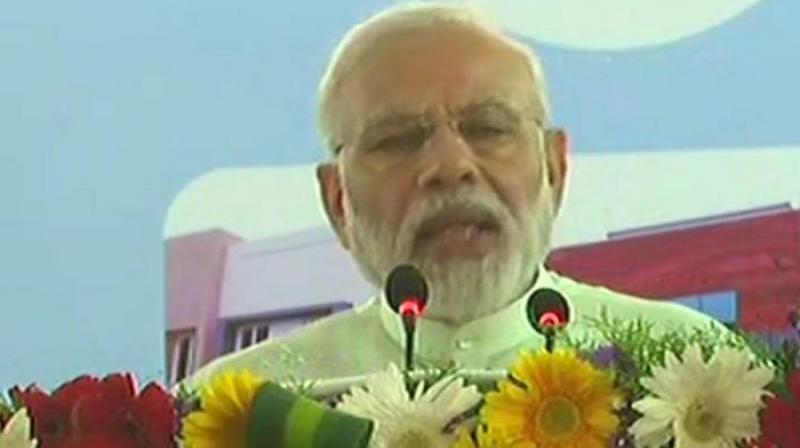 In his address after inaugurating the four-day Defence Expo in Thiruvidanthai, Prime Minister Narendra Modi said laziness, incompetence or 'perhaps some hidden motives' of the previous government had badly impacted the defence sector. (Photo: ANI/Twitter)

Thiruvidanthai: Prime Minister Narendra Modi on Thursday said the UPA government's “policy paralysis” in the defence sector had affected the country's military preparedness. In his address after inaugurating the four-day Defence Expo in Thiruvidanthai, Modi said laziness, incompetence or “perhaps some hidden motives” of the previous government had badly impacted the defence sector.

“There was a time when the critical issue of defence preparedness was hampered by policy paralysis. We have seen the damage such laziness, incompetence or perhaps some hidden motives can cause to the nation. Not now, not anymore, never,” he said.

The Prime Minister also took a dig at the UPA regime for failing to conclude a deal to procure 126 Medium Multi-Role Combat Aircraft (MMRCA) after a long-drawn selection process.

“You would recall the long-drawn process of procurement of fighter aircraft that never reached any conclusion. We've not only taken bold action to meet our immediate critical requirements, but have also initiated a new process to procure 110 fighter aircrafts,” Modi said.

Following scrapping of the MMRCA deal, the NDA government in September 2016 signed a Euro 7.87 billion (approx Rs 59,000 crore) deal with the French government for the purchase of 36 Rafale twin-engine fighter jets.

Ramping up its attack on the government over the Rafale issue, the Congress claims that the deal negotiated under its rule was much cheaper than the contract signed by the Modi government to procure the Rafale jets.

The UPA government floated a tender in 2007 for the purchase of 126 MMRCA for the Air Force. After the negotiations, Rafale and Eurofighter Typhoon remained in the reckoning. However, the deal could not be finalised by the UPA regime.

Modi said the government was committed to making India a leading manufacturer of defence equipment and building two defence industrial corridors, "with room for everyone".

“We are committed to establishing two defence industrial corridors, one in Tamil Nadu and the other in Uttar Pradesh. These will utilise defence manufacturing ecosystems in the regions and further build upon it. The corridors will become engines of economic development and growth of defence industrial base,” he said.

The Prime Minister added that venture capital and start-ups in the defence sector will be encouraged.