DefExpo takes off, to boost strategic partnerships in defence. 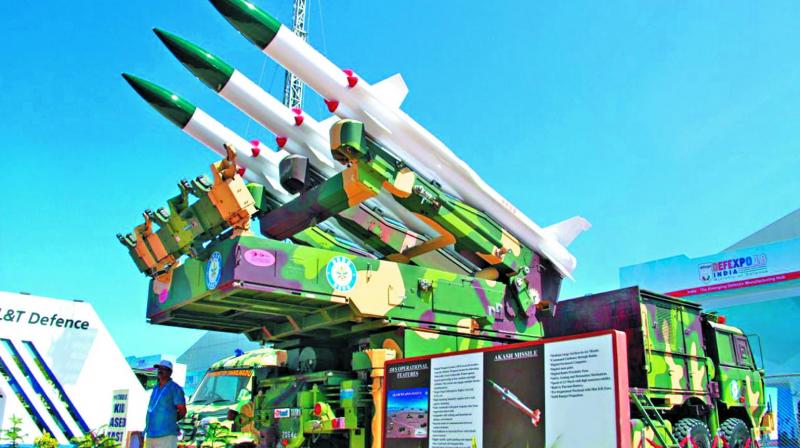 Combat vehicle equipped with Akash missiles have been stationed at DefExpo 2018 at Thiruvidanthai near Chennai on Wednesday. (Photo: N.Sampath)

CHENNAI: Are you one among who thinks that Indians do not find a place in major technology-based international exhibitions? Come to Thiruvidanthai.

Indian defence manufacturers, particularly the state-owned DRDO (Defence Research and Development Organisation) is the showstopper on the DefExpo with new defence platforms and indigenous weapons lined up in the swanky halls of the expo. DefExpo has not only attracted manufacturers, but also armies of various nations who are seeking high-end warfare equipment. “We have been visiting the expo for the last many years and the expo is getting better every year,” said Nguyen Dinh Chen, a senior colonel from the Vietnam army. He added that the Vietnam government will decide the types of arms that their army will procure from the expo.

Reiterating the intent behind the expo, defence minister Nirmala Sitharaman said that 75 per cent of the firms are Indian based and added that the expo would project the country as a manufacturing hub.

Meanwhile, foreign firms like Boeing and Lockheed Martin who are eyeing  Indian contracts for aircraft and hinted that they would set up manufacturing plants in India, also  participated. The Swedish manufacturer Saab and the Israeli firm Elbit have tied up with the Adani Group which is making its foray into defence. India based Cyient, a provider of engineering design, has tied up with Israel’s Bluebird Aero systems to offer unmanned aerial vehicle systems to Indian defence and industry at Defexpo 2018.

The expo showcases not only private partnerships; the public sector unit DRDO also boasts of its advanced defence equipment that it manufactured with TATA. “Recently, the DRDO inducted the NBC (nuclear, biological, chemical) recce vehicle into the army. The vehicle can be used to detect nuclear radiation in the warfield,” a DRDO official said.

Explaining about the future projects of the DRDO, the official said that the organisation had drafted technical specifications and designs for an armoured platform on wheels. “The heavy tank-like vehicle will enable our army to manoeuvre in deserts. Our 52 labs are working to innovate new technology in the defence sector,” he said.