As the protesters refused to disperse, Additional Deputy Superintendent of Police slapped one of the women and pushed two others. 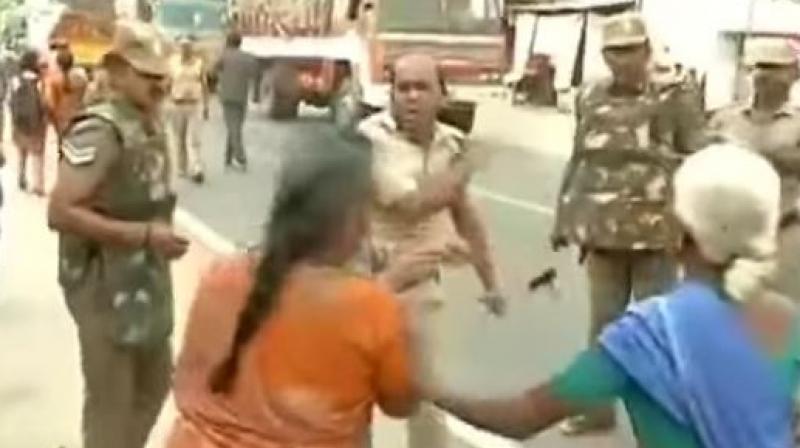 Coimbatore: A senior police official slapped a woman protester during a crackdown on an anti-liquor agitation in neighbouring Tirupur district with the act, caught on camera, coming in for strong condemnation.

The incident occurred last evening in Shamalpuram when a group of people, including women, blocked a road demanding closure of state-owned TASMAC liquor outlet in the locality.

As the protesters refused to disperse, Additional Deputy Superintendent of Police Pandiarajan slapped one of the women and pushed two others, asking them to move away from the road. Protesting this, a section of the agitators allegedly pelted stones at the police, who resorted to lathicharge to disperse them.

Police said three persons were injured in the melee with one of them being hospitalised.

As the video showing the act went viral, various political parties, including DMK, condemned the 'police brutality'. Shops in the locality remained shut today in protest against the police action.

The assault of the woman was raised in the Madras High Court this morning by social activist Traffic Ramaswamy and PMK's legal wing member K Balu, who sought action against the police official.

Following a special mention on the matter, a bench comprising Chief Justice Indira Banerjee and Justice M Sundar agreed to hear their petitions later in the day.