The high commissioner then sought to make a quick exit, but was chased by reporters on the stairscase and in the IIC lawns. 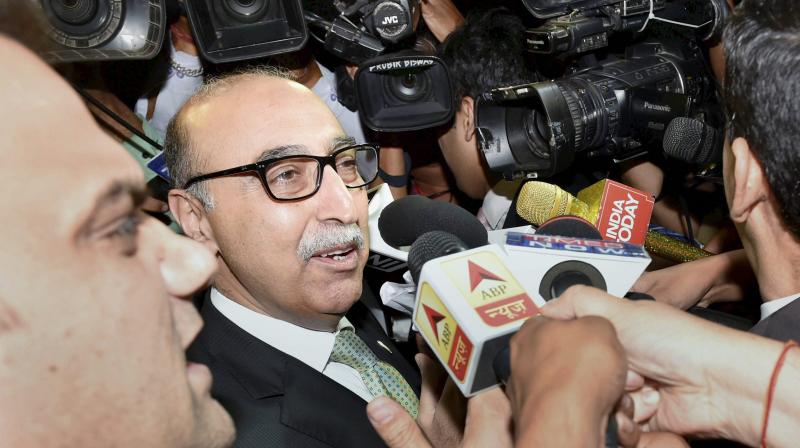 Pakistan's High Commissioner Abdul Basit talks to media after attending a programme of Centre for Peace and Progress in New Delhi. (Photo: PTI)

New Delhi: Ruckus prevailed briefly at the end of a conference in New Delhi as several members of the media mobbed Pakistan high commissioner Abdul Basit and former foreign minister Khurshid Kasuri, forcing the envoy to make a hasty exit.

Kasuri was in Delhi to attend the conference on ‘Improving Indo-Pak Relations’ at the India International Centre that was also attended by senior Congress leader Mani Shankar Aiyar and noted lawyer Ram Jethmalani.

During the event, some reporters asked questions to Kasuri and Basit on the death sentence awarded to Kulbhushan Jadhav by a Pakistani military court. But both of them declined to answer.

As soon as the event got over, reporters and camerapersons first mobbed Basit to get his response on the sentence, which has been condemned by India.

The high commissioner then sought to make a quick exit, but was chased by reporters on the stairscase and in the IIC lawns until he sped away in his car.

Kasuri sought to exit through a different route but was pursued by the media men who asked questions for nearly 10-15 minutes, including on issues of consulate access being sought by India.

The former Pakistan foreign minister was then escorted away by the organisers.

Pakistan sentenced Jadhav to death for carrying out espionage and sabotage activities in Balochistan and Karachi, the military’s media wing Inter-Services Public Relations (ISPR) had said in a statement.

According to ISPR, Jadhav alias Hussein Mubarak Patel was arrested on March 3, 2016 from Mashkel area of Balochistan for his “involvement in espionage and sabotage actives” in Pakistan’s restive Balochistan province and Karachi city.

India had acknowledged that Jadhav had served with the navy but denied that he has any connection with the government.

Earlier in the day, a group of people led by Congress leader Shehzad Poonawalla protested outside the Pakistan high commission against the death sentence of Jadhav.

The protesters, numbered around 18-20, arrived outside the high commission around 10.30am and were detained and taken to Chankayapuri police station, said a senior police officer.

The protesters were detained for a couple of hours and later released, he said.

Poonawalla was taken inside the commission by police, and he submitted a memorandum seeking the overturning of the death sentence awarded to Jadhav in the alleged espionage case.

“Was taken to Pak HC from back gate to give memorandum seeking justice for Kulbhushan Now being taken back to Chanakyapuri police station,” read one of Poonawalla’s tweets.