Give peace a chance

A full-scale war is not affordable for anyone at the end of the second decade of the new millennium. 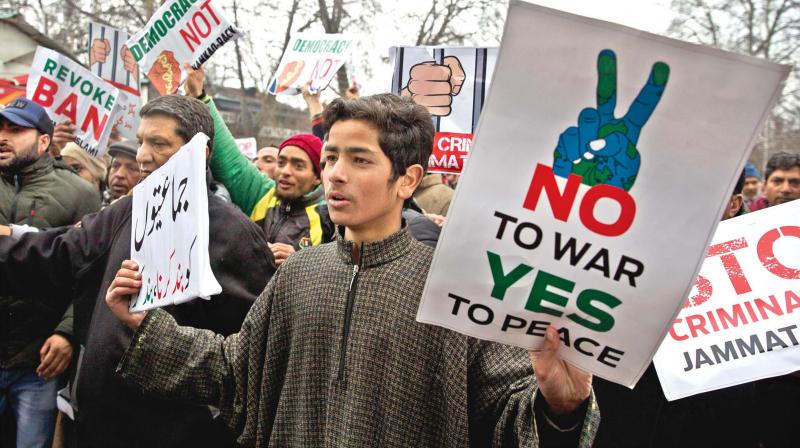 There is no better feeling than coming back from the brink. In three tense weeks since the V-Day attack on Pulwama, a conflagration was touch and go. Nothing should please us more than saner counsel prevailing on both sides of the border although Pakistan’s overweening ambition of destabilising India is never to be underestimated, such being the nature of its perfidy. However, at least this time, it may have been held back by the diplomatic pressures exerted, including by all-weather friend China.

A full-scale war is not affordable for anyone at the end of the second decade of the new millennium. Prepared we may be to go the distance to take on the enemy and save the country but the wiser course would be to know the extreme extent of brinkmanship and leave it there. Neither an impoverished Pakistan nor a far more economically strong India can go to war in which there are no real winners. What India has achieved post-Pulwama is to show to the world what a rogue state like Pakistan can do in its provocative use of terror as State policy.

India drew new red lines in taking on Pakistan and came away with diplomatic victories in our neighbor being forced into all kinds of somersaults in having to actually act against terrorist organisations, however contrived all that may seem in the longer run. Right now, Pakistan’s need to fill its coffers with aid from obliging nations and the IMF to bolster its sagging economy is the highest priority and there was little else its Prime Minister could provide by way of optics than be seen taking action against terror organisations.

We have long known that the price we pay for our freedom is eternal vigilance. Society may often be seen to be helpless against lone wolf attacks like the one carried out in the Jammu bus stand by a youth. Our intelligence agencies work behind the scenes for millions of man hours to ferret out intelligence and crack conspiracies and thwart terror, but they cannot publicise it. What differentiates the inspired attacks controlled by so-called non-State actors as in Pulwama is the visible hand of Pakistan. And those must stop if peace is to be given a real chance in the subcontinent.

Not for a moment can we believe that things have quietened down since the Abhinandan capture and release preceded by the downing of a Pakistani F-16 when it flew aggressively near or over Indian airspace. This is just a lull after the storm that blew so intensely as to threaten to suck everyone into another Indo-Pak war. If we were to think for a moment now, much as Imran Khan himself is saying, about how better off both nations would be economically if we were not drawn into war. Let businesses flourish and trade bloom would be idealistic calls to remedy the situation even if they seem ready to be consigned to the wistful thinking bin.

The strategic game is to keep India on tenterhooks to suit China and Pakistan. Not even USA can pitch in too heavily into the imbroglio as they need Pakistan to keep speaking to the Taliban across the Pak border with Afghanistan. This geopolitical-military game is too complicated for there to be the kind of peace Imran Khan is talking about even as his government is sending signals to the international commuity by taking over seminaries of the “banned” terror groups like JeM. But don’t even ask about Masood Azhar or Hafiz Saeed as these are honoured State guests who may be asked to lie low now while the heat is on. Not even the highest international pressure can force Pakistan to act against these two worthies.

The way forward for India is to protect our border from infiltration and refine the gathering of electronic intelligence to make the nipping of terrorism in the bud possible 99 per cent of the time. If the youth of Kashmir are driven into picking up arms, it must be treated as an internal matter and action taken against them without oppressing all the populace. It has been known for long what we had in J&K was not just a security issue but a larger political and social one. Having prided ourselves on Kashmir being with India for 72 years after partition, it is obvious that we should treat them as Indian rather than Kashmiris.

There are no tall figures like Sheikh Abdullah to show Kashmiris the way. We have only his successors and others who are out and out politicians thirsting for power and who have done little to further a larger Indian identity for their people. The day the nation wholeheartedly accepts the Kashmiris as our own and need to be protected would be the dawn of true nationalism. Also implicit in such acceptance would be putting a stop to talking of the special laws that came with Kashmir into the Indian Union. Will such a day dawn soon?

R. Mohan is the Resident Editor of the Chennai and Tamil Nadu editions of Deccan Chronicle