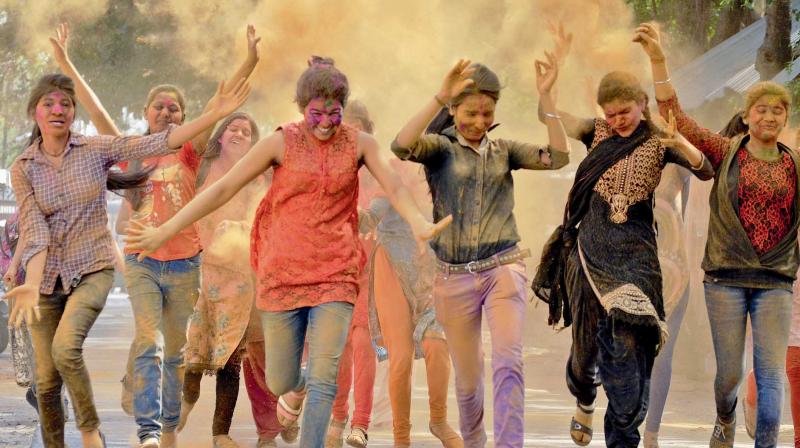 New Delhi: Prime Minister Narendra Modi on Saturday saluted the “hardwork” of the BJP cadre who “tirelessly worked hard” during the elections in five states, whose results were declared on Saturday. Mr Modi will be visiting the party headquarters on Sunday to attend the parliamentary board meeting and is also expected to address the party cadre. Mr Modi also congratulated party president Amit Shah, party office bearers and state units for their “exemplary work in taking the party to new heights.”

The party headquarters at 11, Ashoka Road, was all decked up with flowers, with hundreds of party workers and supporters reaching from all across the national capital region as polling trends started pouring in. Posters of Mr Modi and party president Amit Shah flanked the party office as supporters and workers bursted crackers and smeared gulaal at each other. Music bands were playing tunes, including Holi and patriotic songs like Saare jahan se achcha. Every now and then, BJP supporters would shout “Har Har Modi” and “Bharat Mata ki Jai.” Sweets were being distributed and supporters were showring flower petals on party leaders, who were visiting the office.

“Gratitude to the people of India for the continued faith, support and affection for the BJP. This is very humbling and overwhelming......I salute the hardwork of BJP karyakartas. They have tirelessly worked hard at the grassroots level and won the confidence of the people,” Mr Modi tweeted. Earlier, Mr Modi telephoned Congress’s chief ministerial candidate Capt. Amrinder Singh and congratulated him on his party’s victory and also wished him on his birthday. The Prime Minister also thanked the people of Punjab for giving the BJP and ally SAD the “opportunity to serve for 10 years and for the support we got in these polls.” “Am overjoyed that BJP has received unprecedented support from all sections of society. Huge support from the youth is gladdening,” tweeted Mr Modi. He also assured that “every moment of our time, everything we do is for welfare and wellbeing of the people of India. We believe in the power of 125 crore Indians.” The road leading to the BJP headquarters was blocked from both ends — from Le Meridian crossing to Andhra Bhawan crossing — for vehicles as party supporters and workers kept flocking. The road was splashed will colourful gulaal and party workers bursting crackers and dancing to the tunes played by the music bands. Many Union ministers including Arun Jaitley, Ravishankar Prasad, Mukhtar Abbas Naqvi, Jitendra Singh, Rajyavardhan Rathore visited the party office.